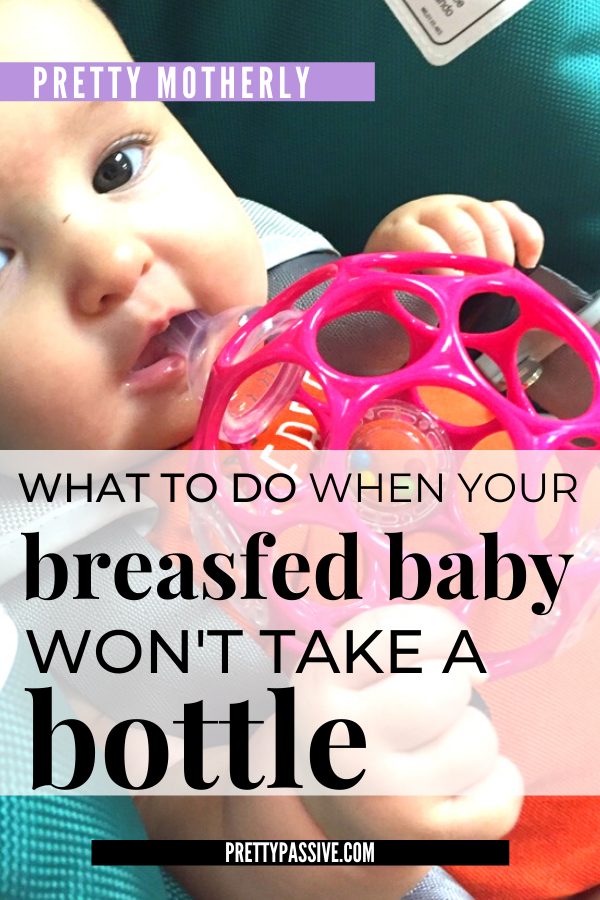 New moms returning to work have a lot to get done before that first day back on the job.

Maybe my stress was to blame, but when I was coping with returning to work and trying to get all of my ducks in a row — my baby stopped drinking from a bottle. Shit.

I was heading back to the office whether I liked it or not, so what do you do when baby won’t take a bottle?

Naturally, unexpected issues arise almost daily in a mom’s world. Although my daughter had taken bottles in the hospital and a handful of times during those first twelve weeks of life, she decided the bottle just wasn’t working out and rejected it. TWO DAYS before my return to work, and for nearly SIX WEEKS after I’d been back.

Well-intentioned coworkers were asking me every day if she finally caved and took a bottle. I had to say “no” and choke back tears thinking about my sweet hungry little babe who just wanted her mommy! While I secretly hoped my office folk would TAKE A HINT and let me go home early until she did. But I digress.

Basically, it was horrible. My daughter was starving herself while I worked, so my Mom Guilt hit an all time high, as you can imagine. She didn’t hate the food, she hated the plastic nipple! So what do you do when your baby won’t take a bottle?

Google it: “how to get my breastfed baby to take a bottle”

Doctor Google to the rescue right? Wrong. My stay-at-home husband was so frustrated by the lack of helpful resources (enter: my blog lol). Most of the information was just forums of people struggling with the same problem, or insistent preaching that “they won’t starve themselves!”

Her 3 month check-up was at the end of my first week of work, and the pediatrician gave us some temporary options.

In all honestly, she did take a bottle eventually. But those 6 weeks were rough for everyone involved, and baby’s gotta eat! So a temporary solution is essential.

Here’s what we tried, and what finally worked!

We spent a small fortune on brands that ensured they were the best bottle for breastfed babies. No… that didn’t work. Next!

Maybe if Dad holds her the same way Mom would while she’s breastfeeding? Let the mind games begin! But nah… she might be smarter than us, and it’s scary, but anyway — Next!

This one is bonkers and I’m not even a little surprised that it didn’t work. This is exactly what it sounds like: put the breast milk in a cup, and help the baby sip it…..

Those sipping reflexes just weren’t there until our baby got a little bigger.

The WINNER! The pediatrician suggested it as a last resort but I’m so glad we gave it a shot. About 2 weeks deep into the misery of mom guilt, dad listening to starved screams, and baby starving herself because she preferred my boob — WE FINALLY GOT SOME RELIEF.

The pediatrician hooked us up with a handful of itty bitty plastic syringes like these, but our local pharmacy gave us a wide variety of sizes for free. We were in business!

Syringe feeding surprised us all as the miracle cure to get a breastfed baby drinking expressed milk. Or any milk at that rate! When I could finally answer “YES! She’s eating! Through a syringe!” I got the craziest looks.

Most of the time people asked what does that mean? That’s when I realized I didn’t even know how this was happening. Whenever I was around she just ate straight from the source. So I had to ask dad to send me some pictures. 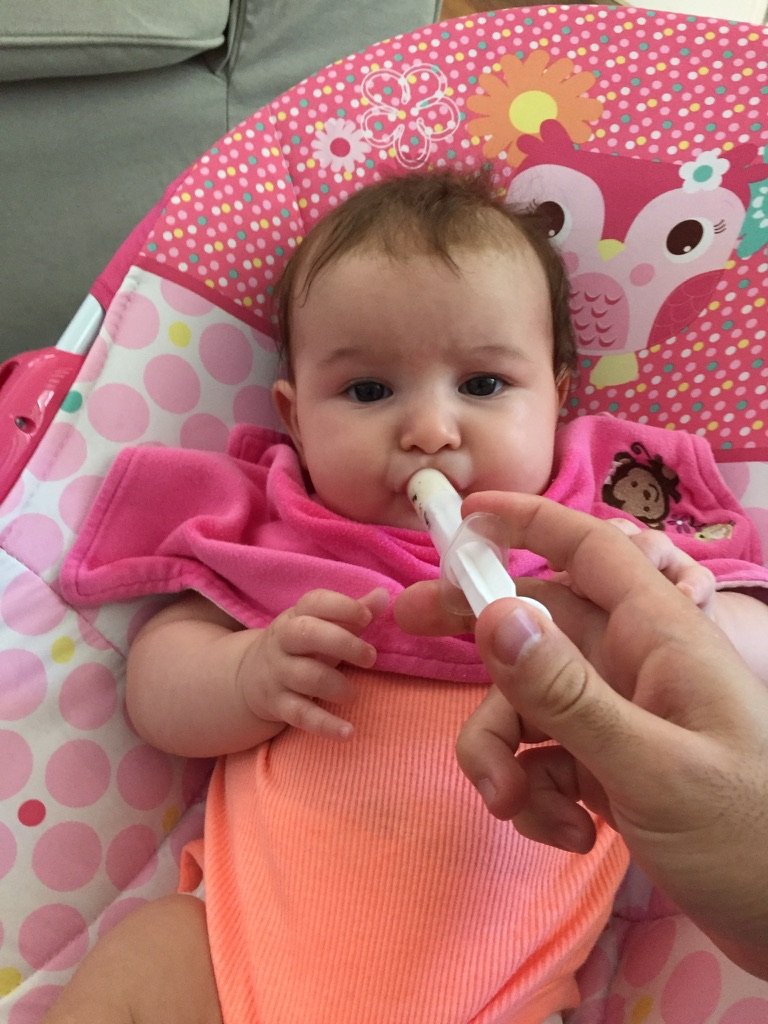 He propped her up in a little bouncy chair since she was still too young to sit up in a high chair. The angle helps with little ones which is why newborns are fed in an almost lying position. Makes sense, right?

It was a total mess, so he kept her entirely covered in swaddles, burp rags, etc while the deed was done. We had a wide variety of syringes ranging in size and volume, but they generally max out at around 5 Ml.

One feeding took about 20-40 full syringes, and that went down about 3-4 times a day.

This went on for about 4 weeks.

the O-Ball hack to get baby to love plastic nipples

With a temporary solution in place, we still had to solve the overall problem: how to get baby drinking from a bottle. During those 4 weeks, he kept trying to wriggle a nipple in her mouth before and between feedings. But no.

Syringe feeding could’ve kept going, but it was not ideal/practical/sustainable. So when I stumbled upon this hack on Reddit, I knew we were on to something. (I can’t find the original source 🙁 but here is my baby at it!) 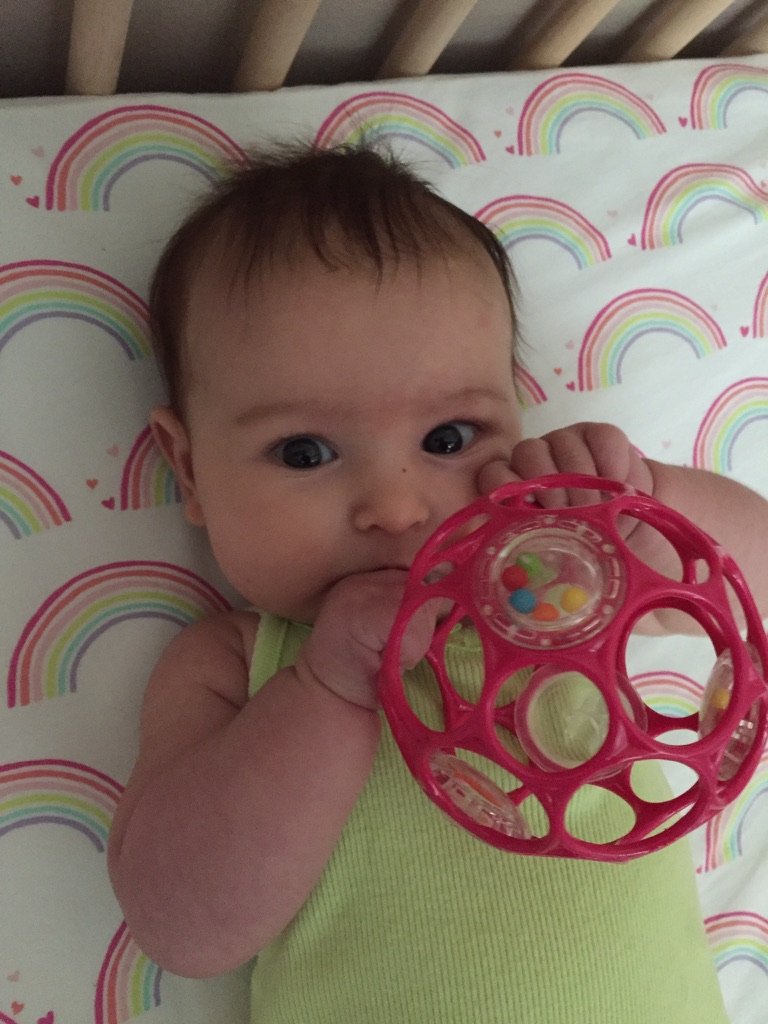 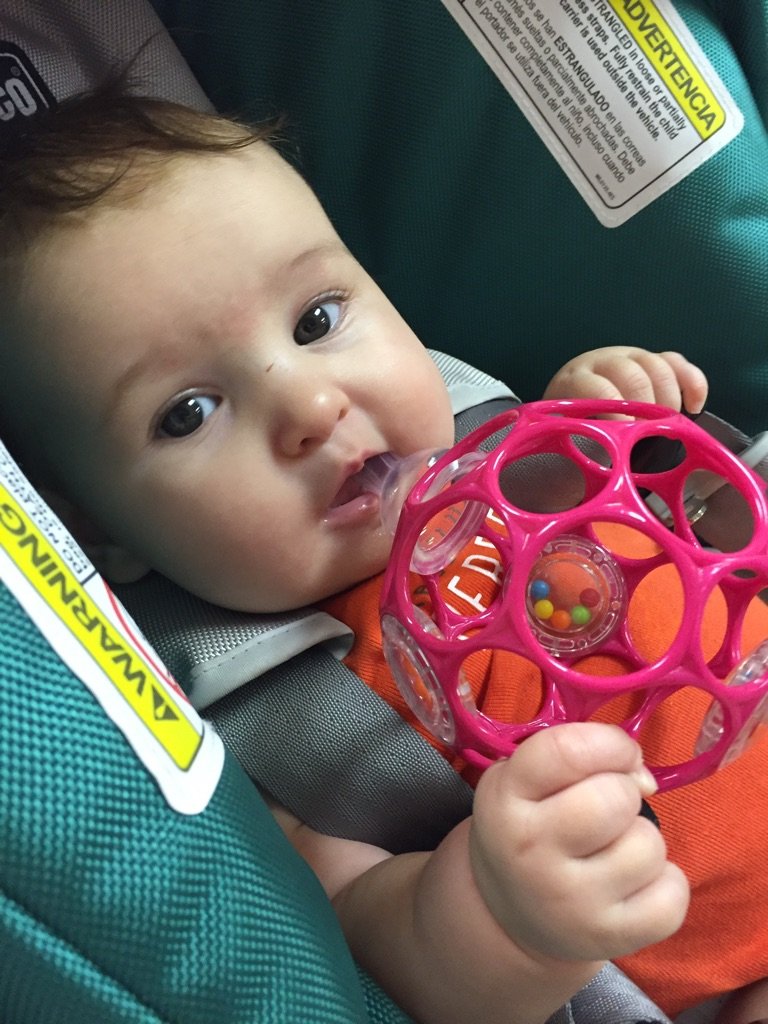 You can’t see much, so let me tell you whats going on. We popped a Medela bottle nipple into one of the “Os” because they fit perfectly. Take note: there is no bottle attached. This was just a strategy to get babygirl playing with and enjoying the plastic bottle nipple.

If your baby doesn’t have an oball yet, I HIGHLY recommend it. It’s a ball & rattle, and it obviously serves multiple purposes! My babe still loves it 2 years later.

Within a few weeks of playing with a nippled oball, she was feeling it. It’s all a game with these people! We did the same thing with a toothbrush (treated it like a toy) and now she LOVES brushing her teeth.

I don’t know if this was the deal-maker since she couldn’t tell me, but I *think* this is what got her into the whole bottle idea. Unless she was just sick of the syringe too, which is likely. 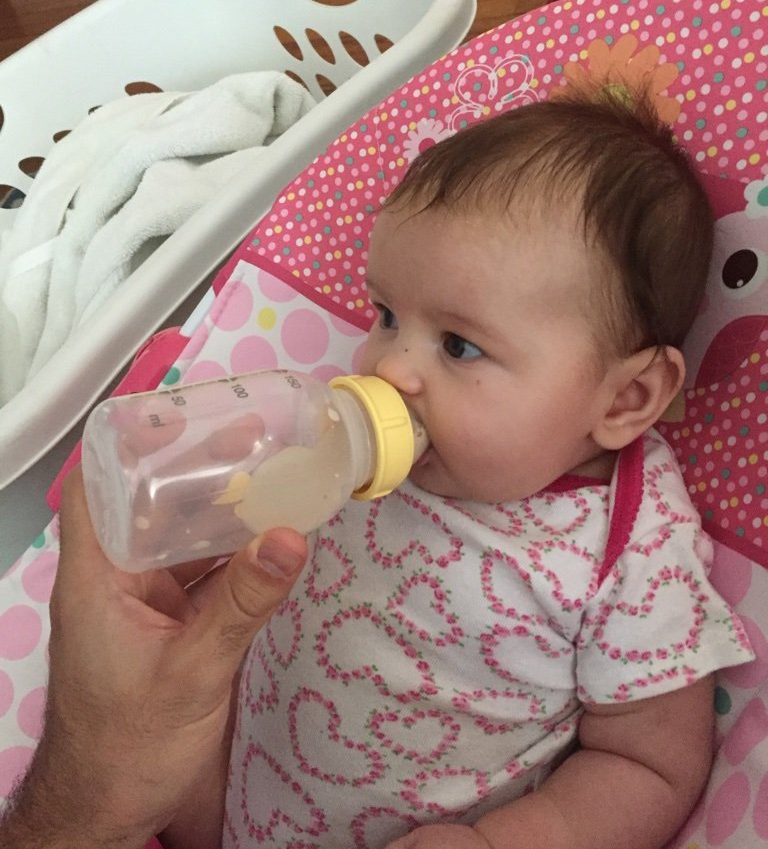 My baby eventually took a bottle, but we figured out what to do in the meantime

Between using a cup, a syringe, and even a straw (?!) my newborn did start drinking breastmilk from her bottle. After 6 weeks back to work, we were onto a new routine with new problems but at least that one was out of the way!

If I had to do it again, I would have saved SO MUCH MONEY on bottles. That was sadly a wasted investment, because although I loved certain brands for certain reasons, daddy wasn’t interested in extra effort. And with him as the caregiver getting yelled at from 8 to 5, he kinda called the shots.

We used the medela bottles almost exclusively because they are so easy to clean and handle. They are cheap, no frills, and always came second best to the actual boobs so that is still a win in my book!

let’s talk bottles. How long did it take you to get your breastfed baby drinking from a bottle? What’s your trick? 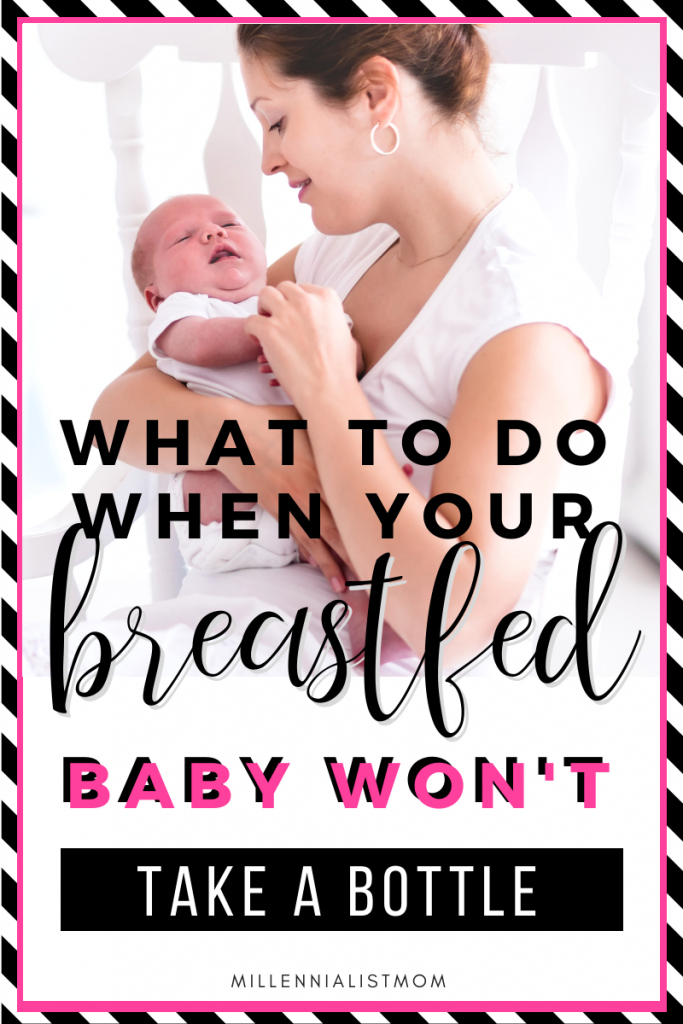 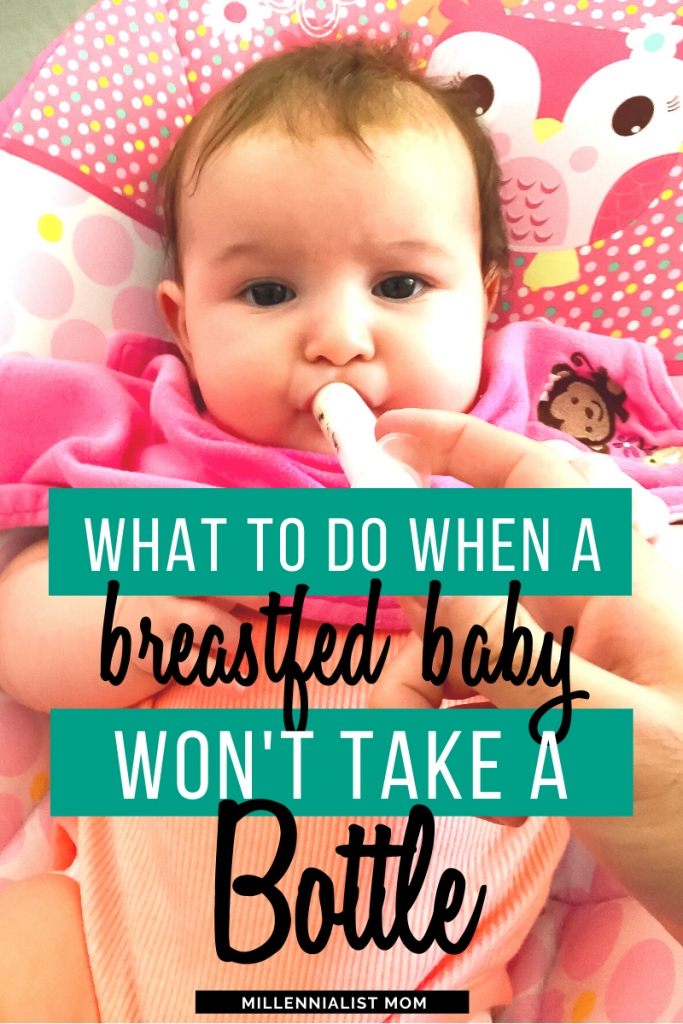 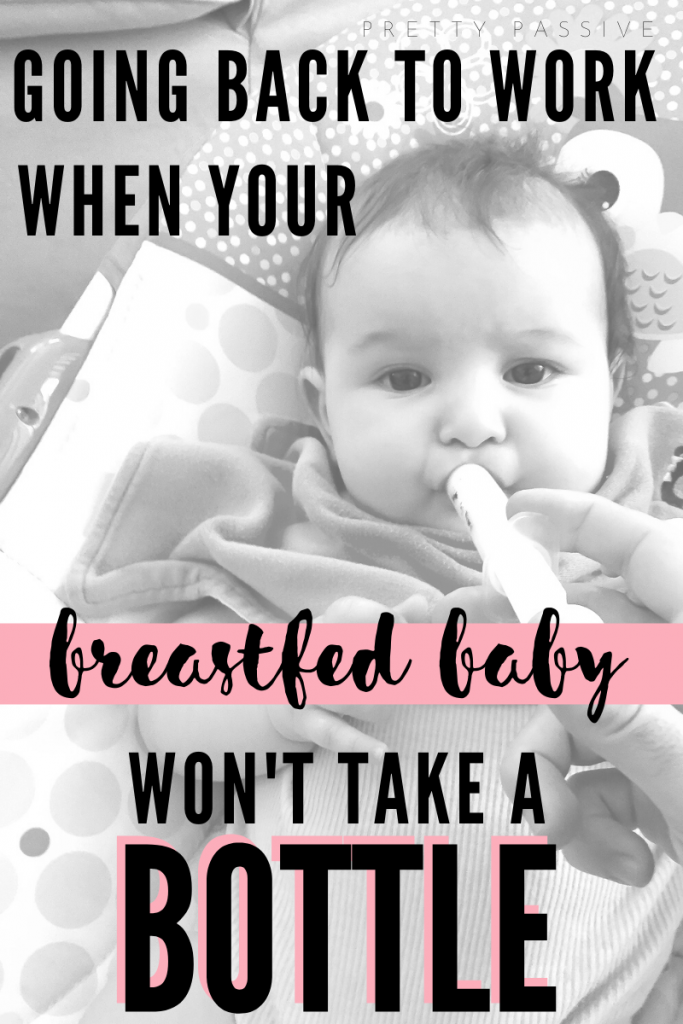