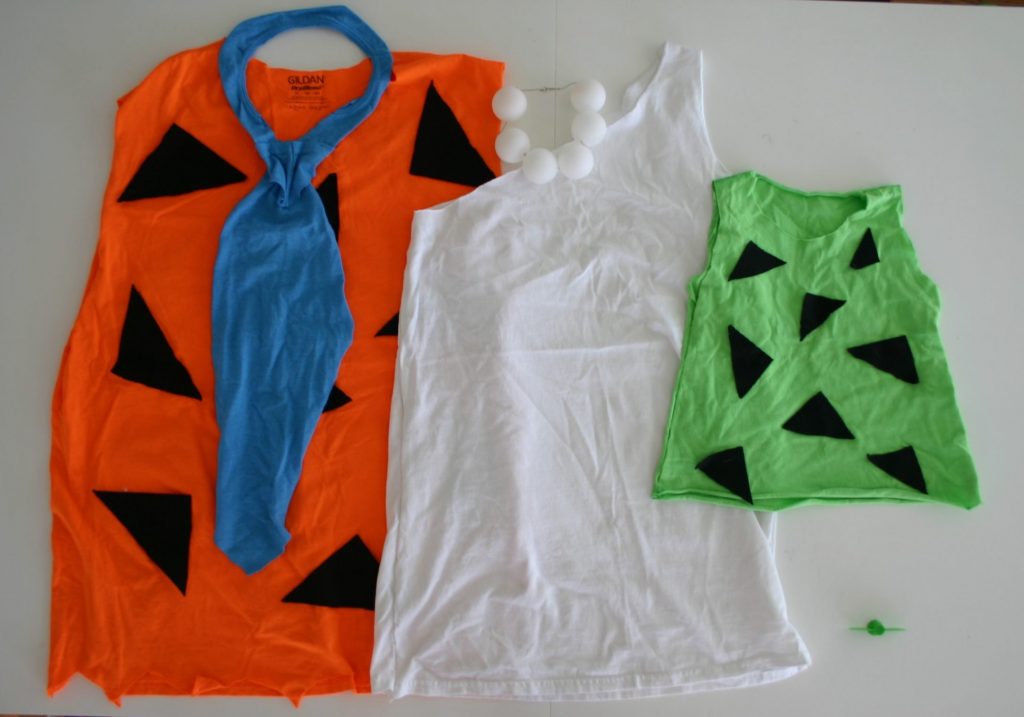 All it took was some felt, a few t-shirts, fabric glue, and a pack of ping pong balls.

And *I think* we’re wearing them this year, too ha! They held up pretty well over the year (and through 2 Halloween get-togethers, including trick-or-treating) so they get to check off the reusable item box that my “investments” have. \

I try to NOT buy anything that can’t be used more than once. And since these are very specific costumes, they are getting a reprise this year.

I wanted to post it sooner but you know, life. The important thing here is that it was crazy easy, stupid cheap, and totally legit. There is nothing I hate more than have unrecognizable costumes! Ok, there might be some things I hate more than that, but answering the “What are YOU??” question all day is easily avoided and let’s me focus on what really matters: CANDY 😉 jk

Either way this costume checked all my boxes. It was:

Including shopping and drying time, this costume set was completed in ONE DAY.

But when it comes to costumes, I can’t justify the typical bagged variety. You know the ones I mean.

The costumes that dominate half of every Party City from September to November. The terrible, one size fits all, faux fabric that looks soooo good (kinda) in a stock photo. Yeah those.

I don’t make that much room in my budget for one-time use items that can’t even live up to expectations. At least not until my daughter starts demanding them! So until then, she is stuck with my sweet renditions of cliche nostalgia <3

I laid the shirt down inside-out, and cut the arms off, leaving the raw edge (removing the seam between the sleeve and shirt). Then I cut the collar off, as close as I possibly could. 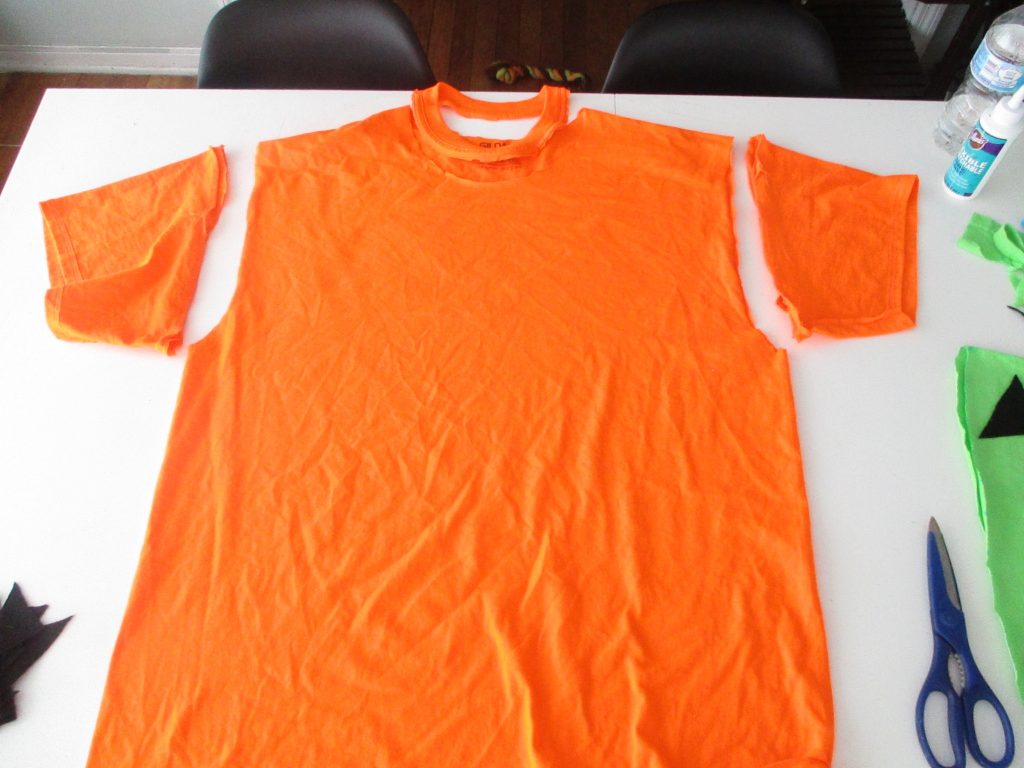 ***keep in mind, my husband was not nearby when I did this. And I generally try to avoid over-cutting. You can always take more off, but you can’t put more on!***

From there, I tried it on myself and snipped a little triangle into the neck bit, but that was unnecessary. It ended up being covered by the blue tie I made.

Next was the black felt. Altogether I bought 8 8.5″x11″ pieces of black felt and only used 3 of them on the Fred Flintstone shirt. I only decorated the front of it though. The back was definitely possible with that much scrap fabric, but this is supposed to be quick and simple so back decoration gets a free pass.

I cut the felt into triangles and didn’t even bother trying to keep them all the same size. I think I loved this costume so much because Bedrock has a very flexible idea of perfection.

Since I was there, doing the damn thing, I put on the t-shirt inside out, and used a marker to give me a good idea of where I wanted the strap to lay on my shoulder. Specifically, I marked where the shirt hit the bottom of my armpits. That was as low as I was willing to let the chest bit go.

Didn’t get to snap a pic because you know, I was wearing it (& secretly thinking it would fail. hard.).

After I cut the one-shoulder look, I tried it back on (inside out) and used some safety pins to pin up my waist and make it look a *little* less like a potato sack. You be the judge, but take note: it is slightly skanky (& so is Wilma, I guess). 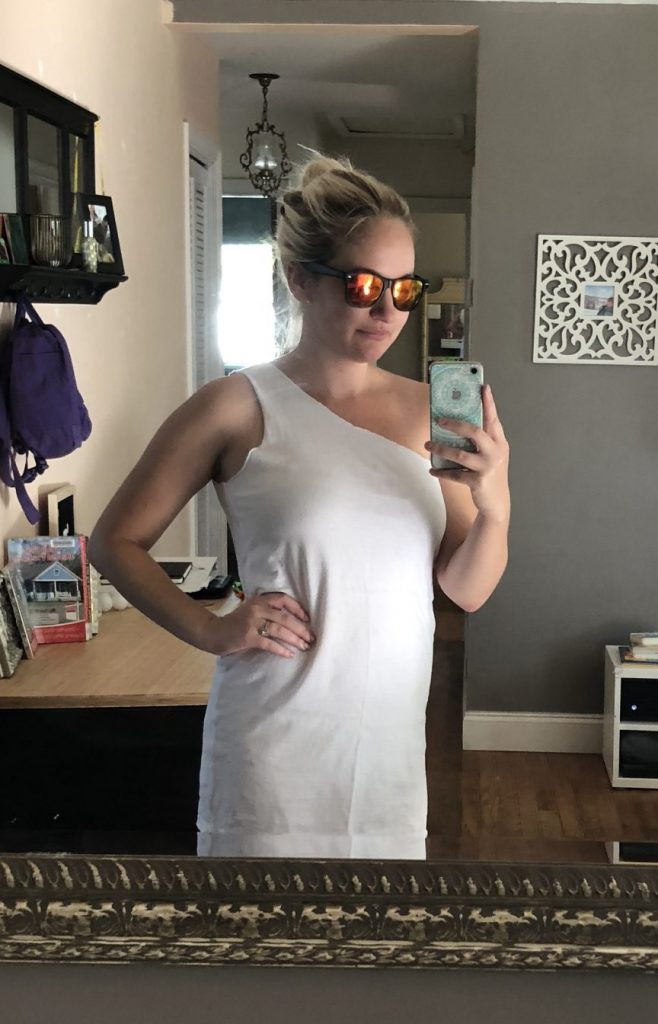 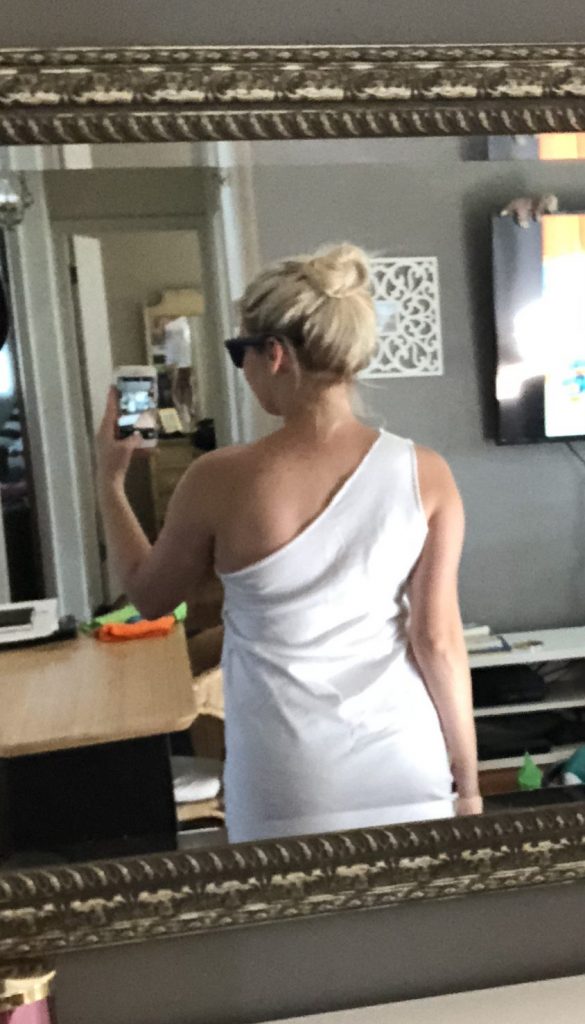 All I mean is she wears a pretty short dress, so I had no problem trying to pull that too. But since I’m a mom, I wore nude pantyhose to keep my t-shirt style on the classier side.

I originally planned to chop up the bottom of the dress in the standard zig-zag style but decided against it. The fabric does not lay like I would’ve liked it to, and it just rolls up in a weird t-shirt way.

Moral of the story – this was E.Z. just like I like it 😉 And maybe I’m just tooting my horn, but I think it looks better than this variation (which costs way more to boot!).

I used a 6 pack of ping pong balls that I got from Publix <3 and a stray chain from my random jewelry hoards. It’s about 17 inches long.

Using a paring knife, I sliced a small 3/4″ X shape and threaded the chain into it. I then used gravity and sunlight to show me where to slice the next X.

I wanted the chain to go directly through the centers, so that was my method!

**I originally tried to cut a hole and that was just silly. The chain could barely fit through it, so It wasn’t easy to work with. I thought the sliced X’s would be too visible, and I was entirely wrong! Phew!

**I would’ve liked to use more ping pong balls, but A) it would’ve made the chain too tight and B) they are sold in packs of 6. Sooooo…. 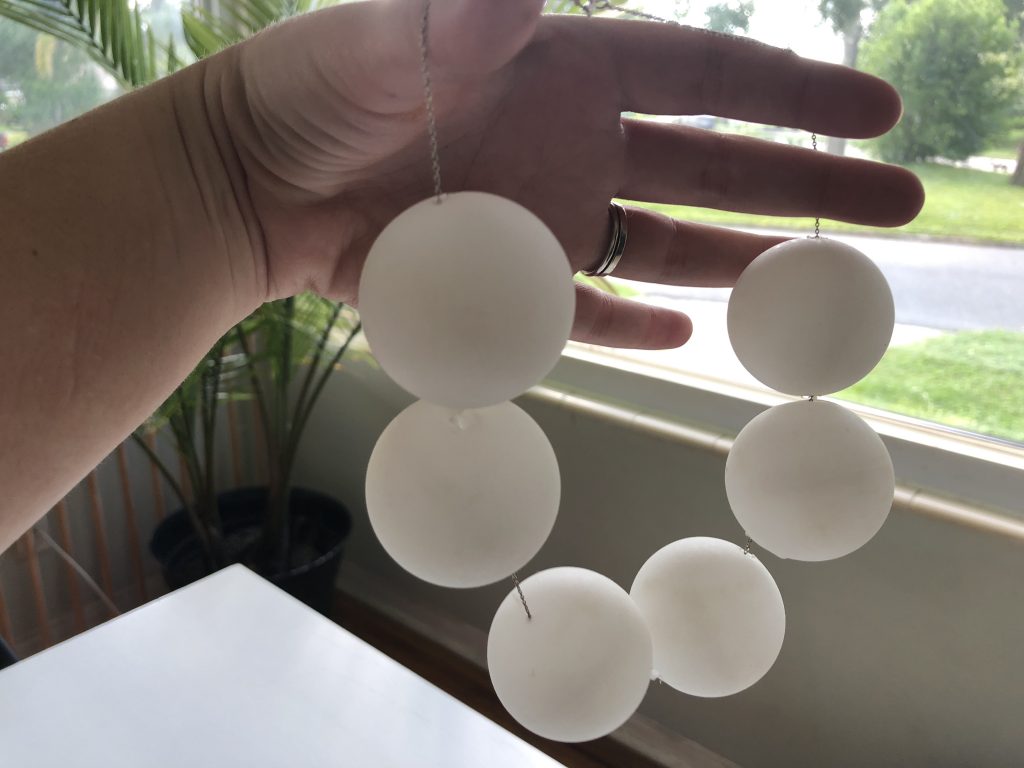 I used one of her regular tank tops as a guide and laid it down on her inside-out shirt. Since that tank top was pretty “fitted”, I marked the shape with that blue highlighter but left a lot of wiggle room (at least an inch extra, then about 2-3 inches at the bottom because it’s supposed to be a dress). 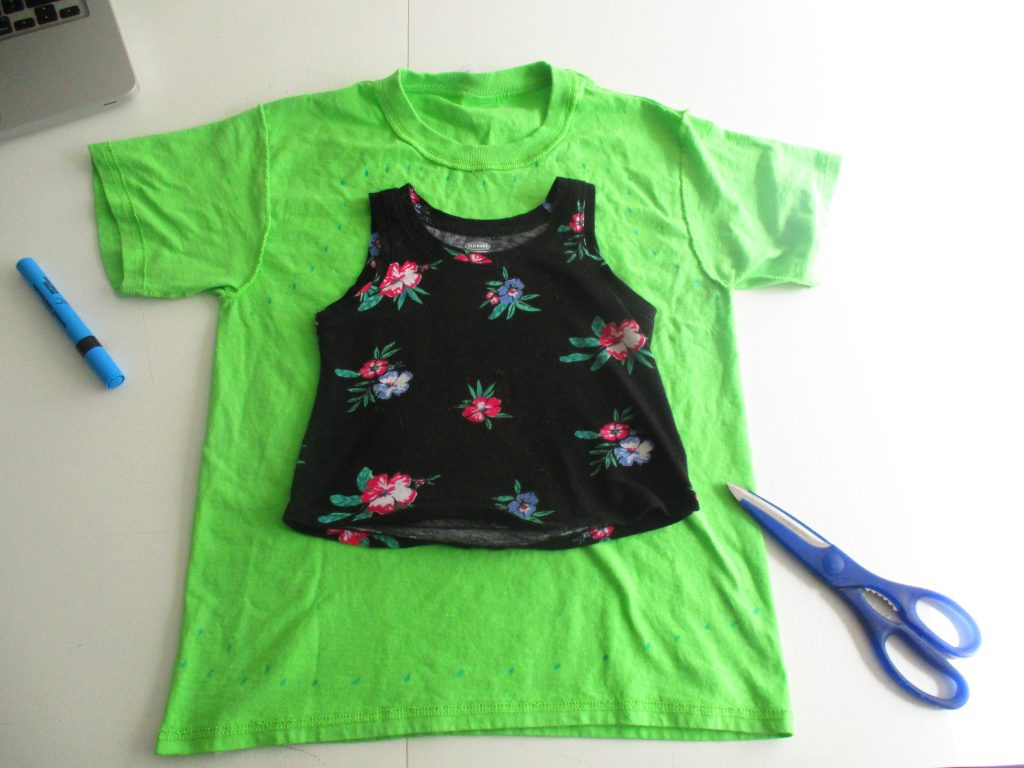 Then cut! I intentionally cut off all the seams, which means I had to create all new seams with the fabric glue. 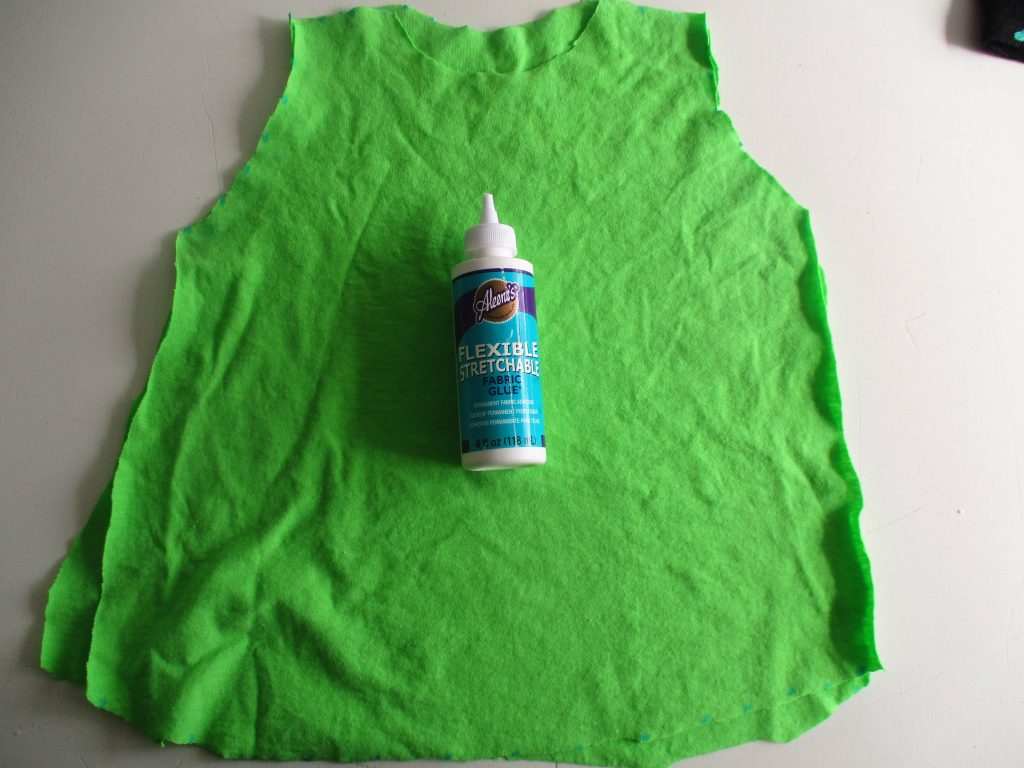 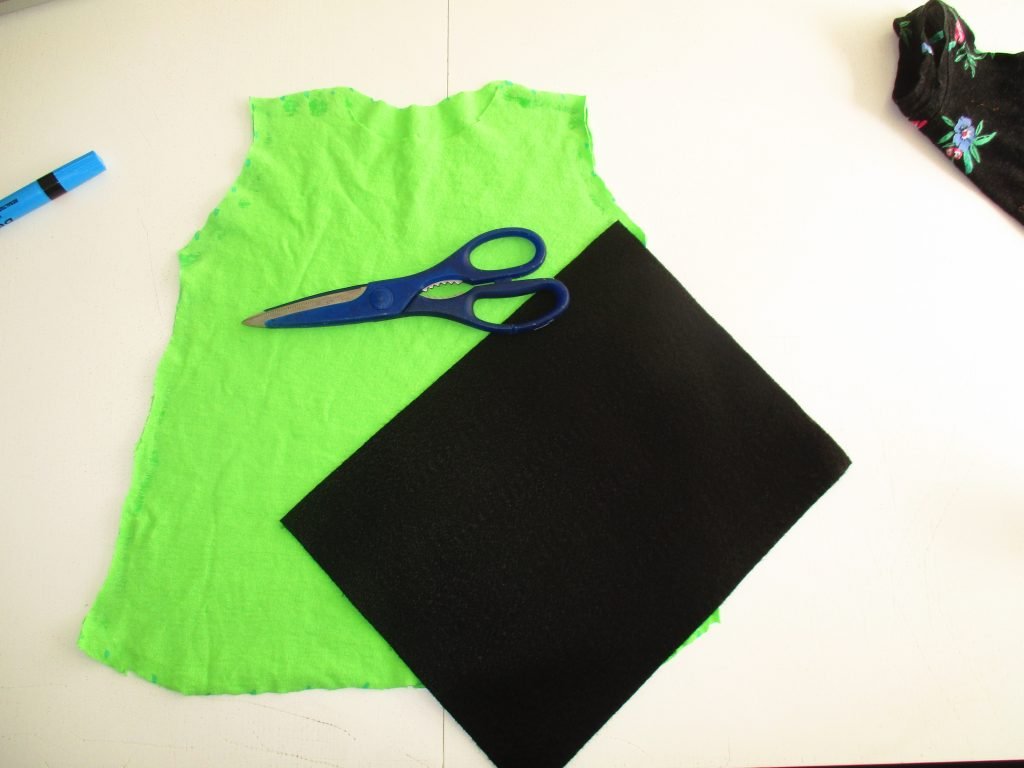 I did a little amateur seamstress work on the shoulder straps because I didn’t want to risk the fabric glue failing while my baby girl ran around.

We cut triangles from the felt and glued all the corners to the shirt and left them to dry. And here we are! 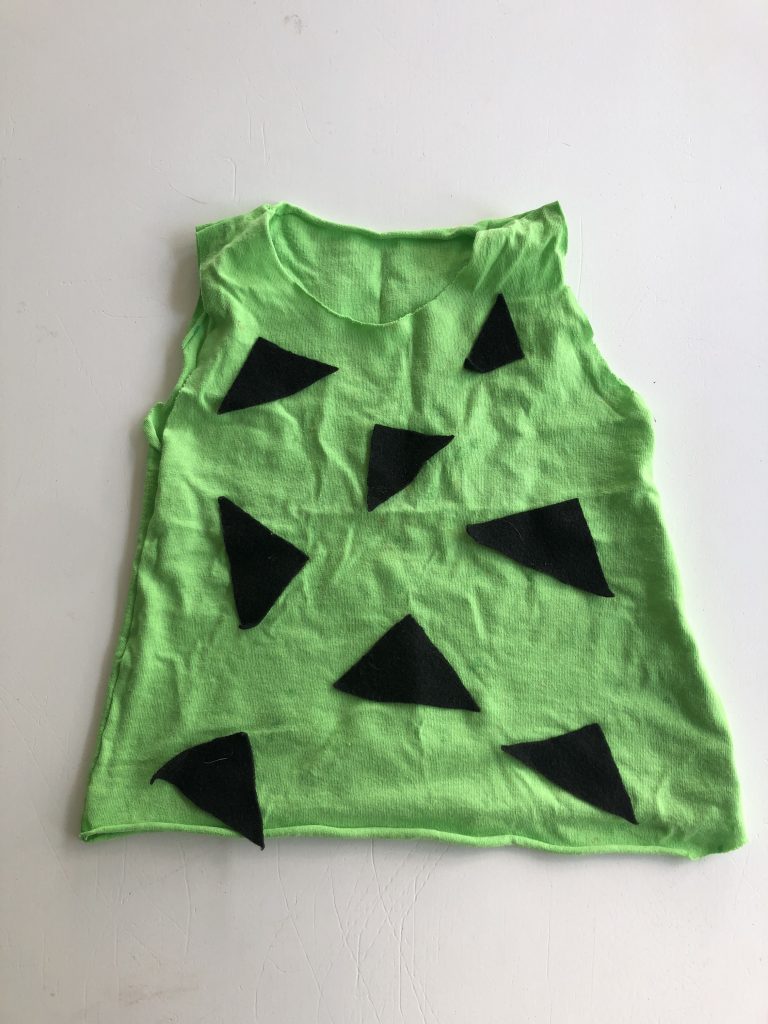 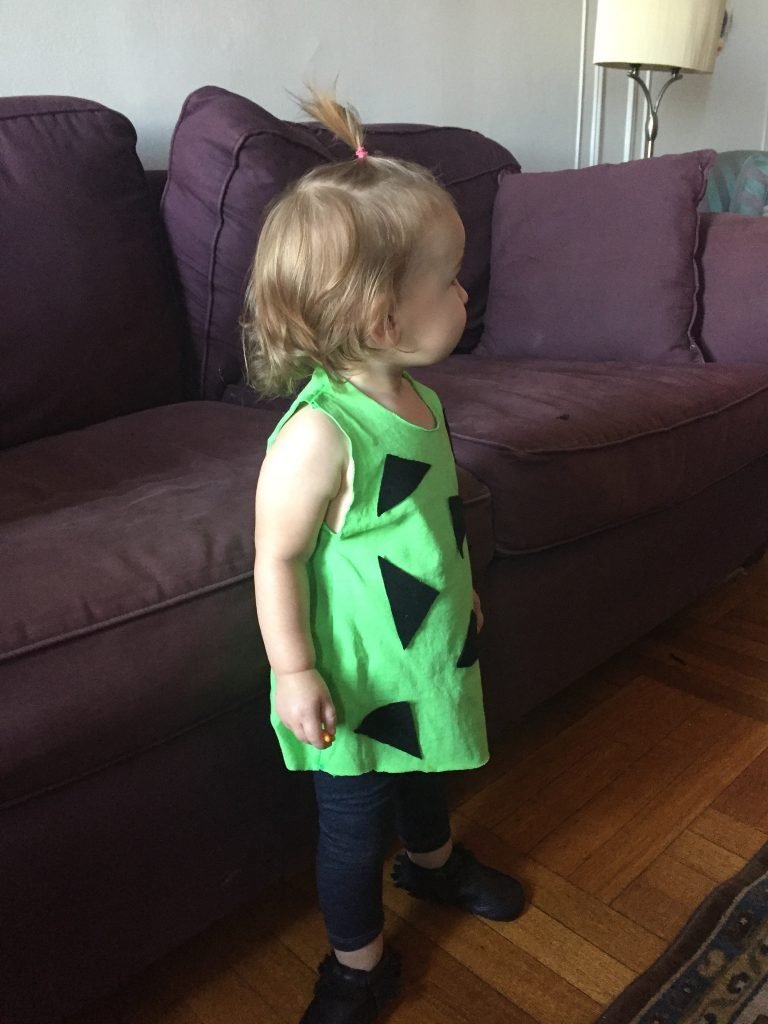 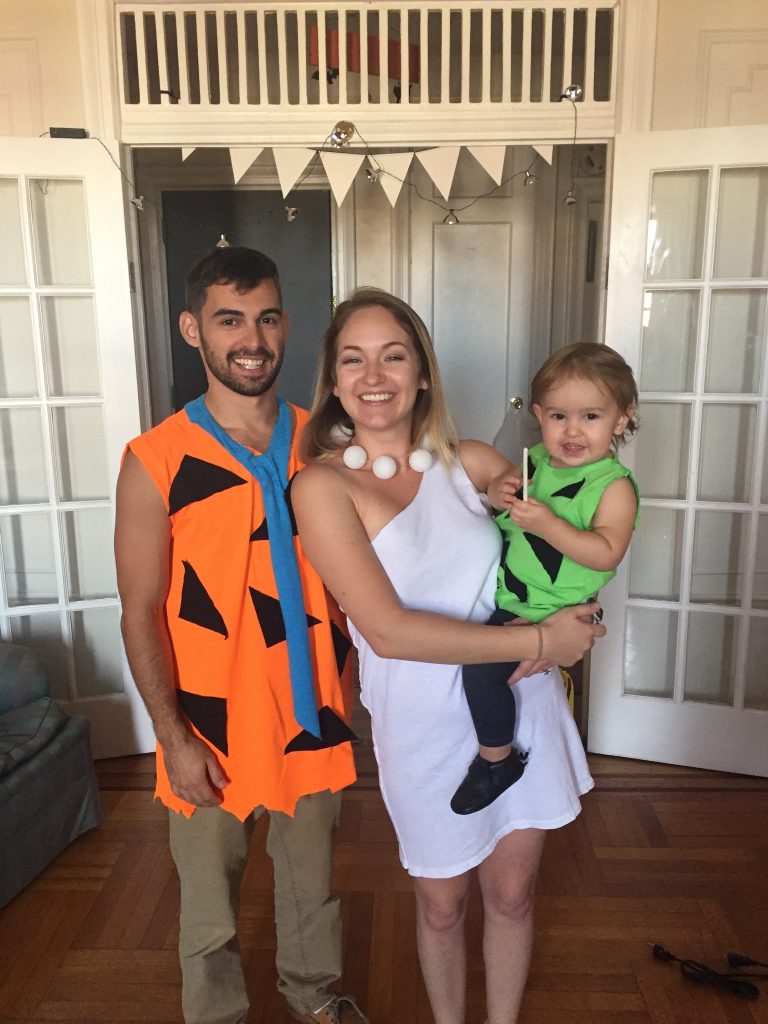 Forgive my face in this one. We hopped off a plane (at Laguardia, no less) and ran to our friend’s Halloween Party.

Sadly this is the BEST picture we have of our Flintstone family costumes on all of us. But I try to be grateful for what I have! Besides, that’s just the way my face looks. 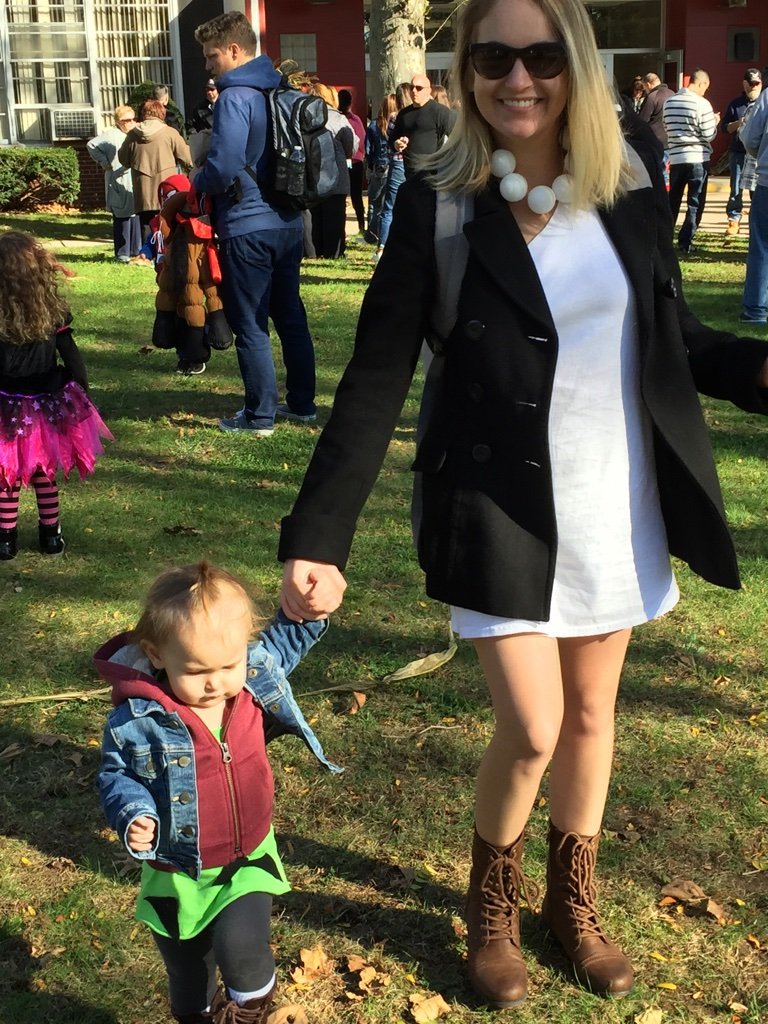 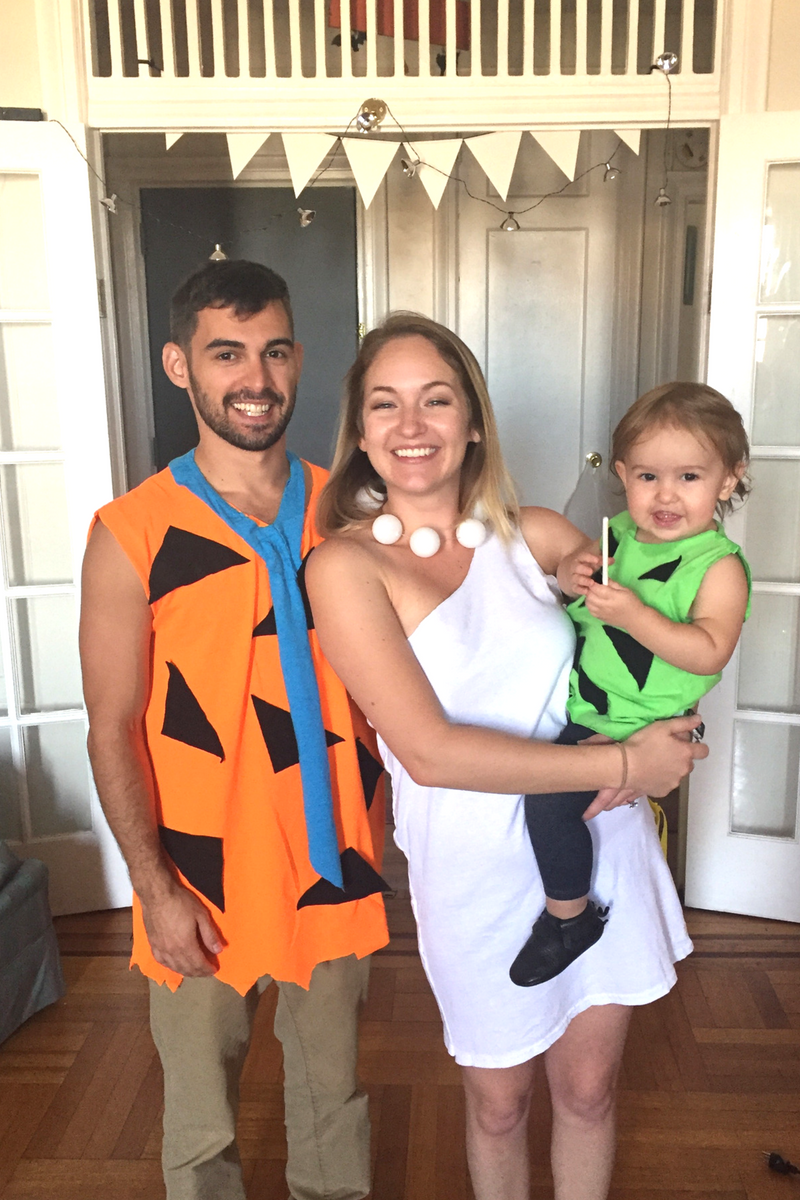 We were in New York for Halloween 2017 which is part of the reason why I’ve justified rewearing these costumes. Nobody at home saw us wear them, and we had to wear jackets over them!

We Floridians don’t get to enjoy beautiful fall weather or colorful leaves, but we DO get to dress super skimpy without worrying about freezing to death sooooo…. 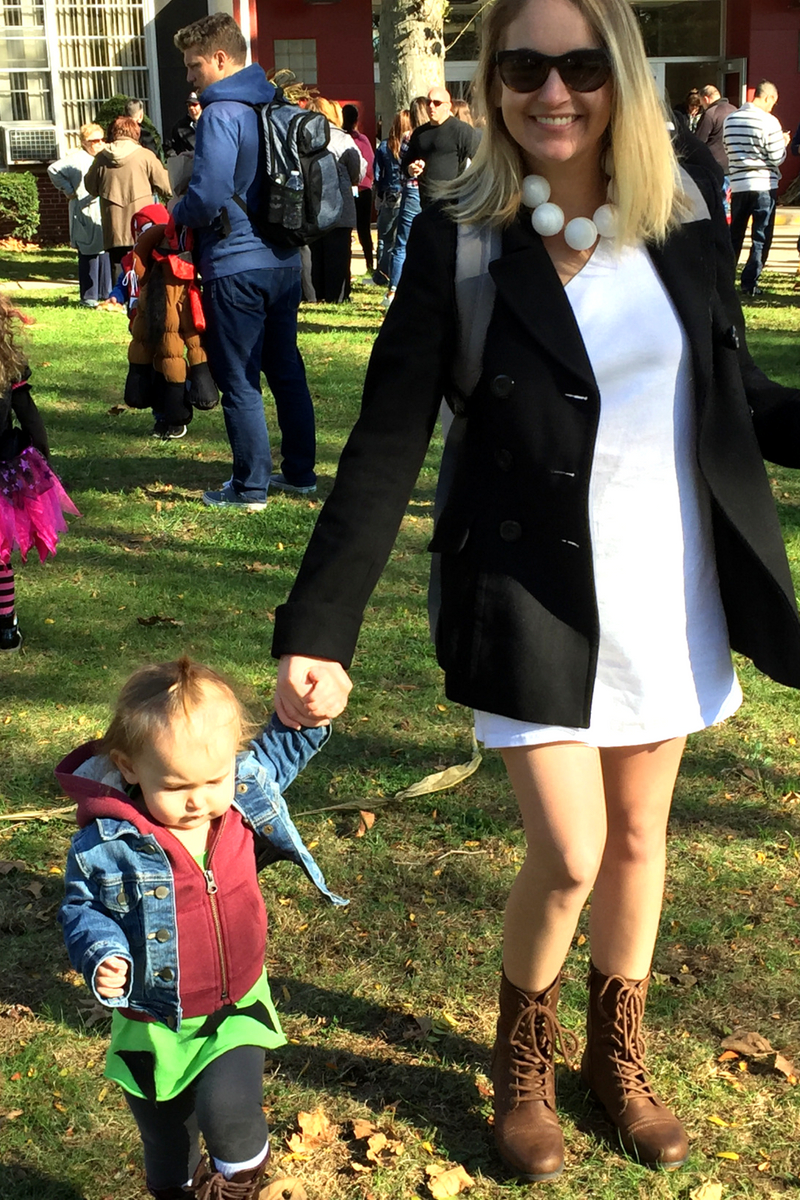 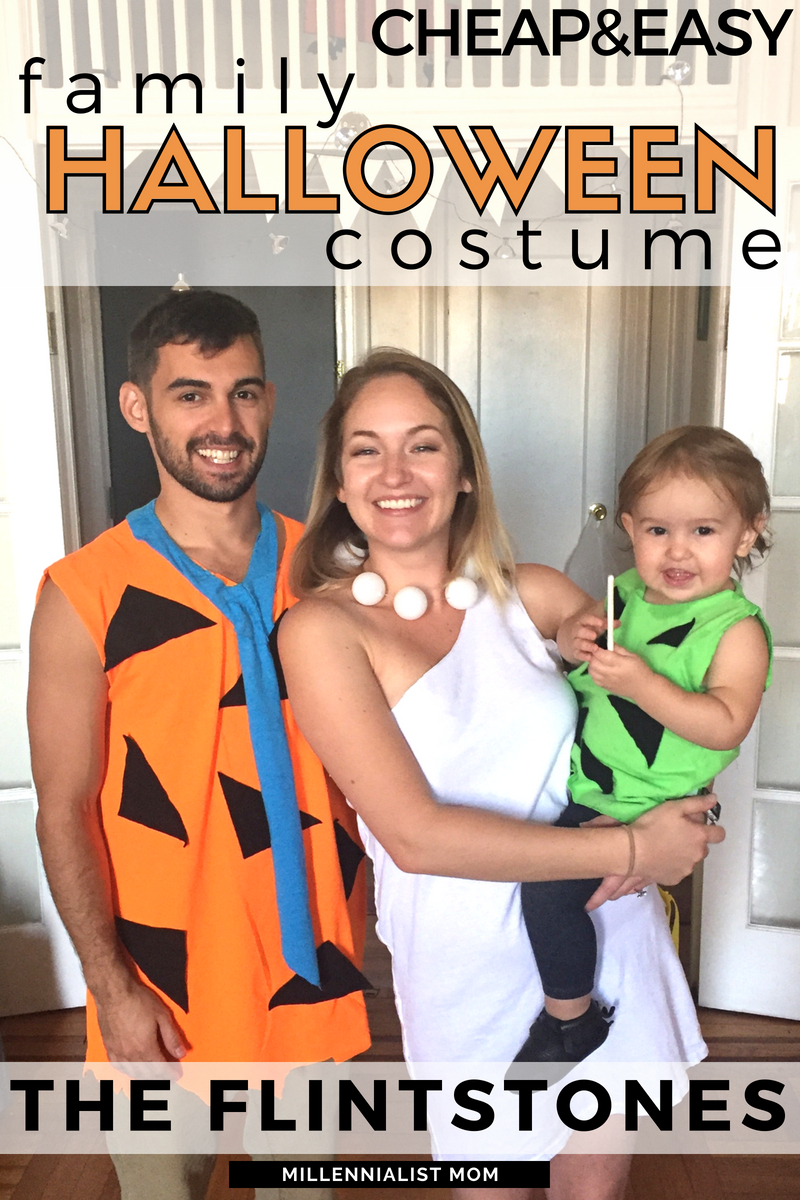 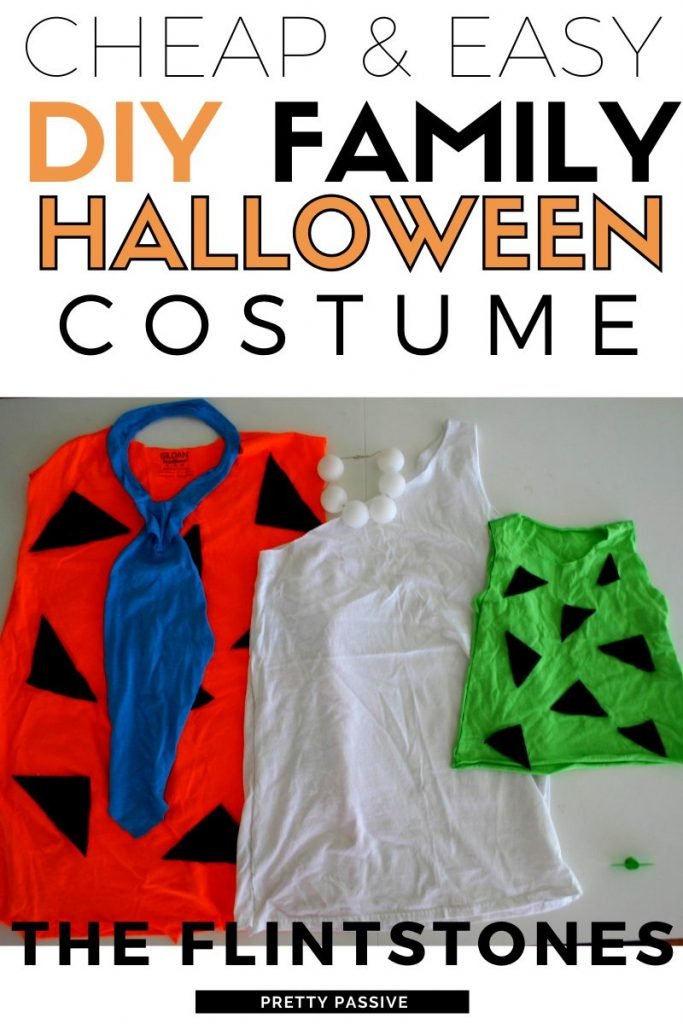