Over the years of planning my kitchen renovation, I had strong feelings about removing the main wall separating the kitchen and living room. But every time I shared my vision with a visitor I’d get resounding “oooo you better make sure that’s not load bearing”s and flip all my energy into not letting my eyes roll back in my head and onto the floor.

Nothing kills renovation vibes more than structural issues. Not only because they’re sometimes impossible/unbudgeted but because the naysayers pop up so fast and get to work on crushing your dreams.

Removing a load bearing wall is not uncommon and does not require the stress everyone thinks it deserves.

Go ahead a read that again.

So many negative words were wasted on me because you better believe I got that load bearing wall removed. And it was wildly cheaper than anyone ever estimated and way easier than people let me believe! 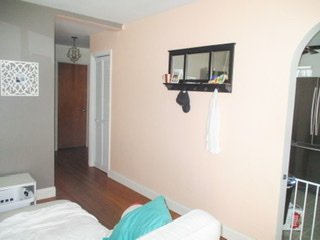 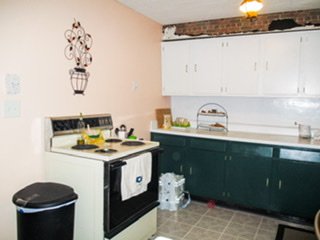 She served a good purpose. The open concept living/dining is overrated according to some, but our kitchen was sooooo saddddd that it was getting completely gutted anyway. And I really wanted the chance to tear this sucker down and go through the whole process! (You’re welcome)

Paint color is Sherwin Williams Naive Peach, btw. I still love this color and need it to make a comeback!

We had painted the kitchen cabinets during my first maternity leave and made do with the super 70s kitchen (with mushy floors, brick contact paper, and mildew-smelling wood cabinets to boot). Not to mention the floating stove with no real home. That drove me so crazy which could be part of the reason why I wasn’t sad to see the wall go.

Grabbing my kitchen renovation by the horns

Before this entire process began, I already had my design in mind and started gutting the place (the cabinets on the left wall were gone. No one could stop me at this point lol. 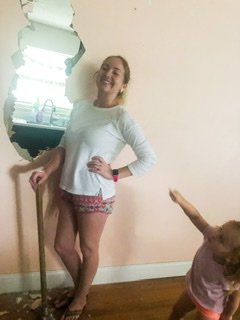 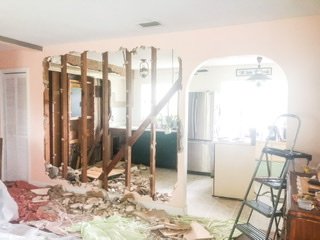 As much as love the color, I love tearing stuff down more. For the record, there’s no better cure for PMS.

How to remove a load bearing wall – on a budget*

Sure enough that wall was load bearing, but I’ve seen enough Fixer Upper and remember Jo saying something along the lines of “just do it” when the design is worth it. Clearly it takes a team of guys to get it up there, and in my case I had my husband, dad, brother, and handyman cousin.

My cousin freelances as a jack of all construction trades, and he walked me through the steps. I’m one of those people who needs to understand how things work because it’s easier to justify the task when I can visualize the work being done. So the first thing to do is decide how large the new opening will be. The new hole in my house was going to be 14 feet wide.

Considering the IKEA kitchen plans I made (and remade, and tweaked, and retweaked), I had the size of the opening figured out just fine. This is the entire length of the new opening, but you have to account for the width of the multiple 2x4s that will hold up the beam. That count becomes more clear after the next step, but have a general idea of the new hole (+ or – a couple feet on each side) will get you a couple adequate comparisons. I wanted an 11ft hole.

The load bearing wall isn’t just disappearing, it’s being replaced by a super strong beam that will carry the load (get it?). My 11 foot hole is centered with the roof pitch, so our new beam is supporting the roof.

Believe it or not, there are some simple formulas to calculate how much weight that beam needs to hold. And of course there are online calculators to make it easier. All you need to know is the width of the roof and some general details about your house.

We have one of the easiest structures to replace a load bearing wall in. One floor with no snow load to worry about. Regardless, it’s always better to be extra generous with your calculations and over estimate the load. A bigger beam with more supports is awesome and helps me sleep better at night!

Also, I appreciated having a subcontractor *cough* experienced cousin weighing in on the measurements. Two heads are better than one!

No load-bearing walls are created equal, but they all follow the same process. The biggest difference between mine and yours is what that part of your ceiling is built to hold up. That is the only thing you can’t expect a stranger to tell you over the internet!

Because of that, I highly recommend hiring a subcontractor/structural engineer with trustworthy experience in this arena to validate the “load” and provide a perspective on the bare minimum of what is needed to maintain the structural integrity of the home (then add some extra strength!!).

Build a sacrificial wall to temporarily hold the load

12 or so 2x4s were used to stand in as studs during the transition. My cousin was hesitant to let me “waste money” on a building a wall we were just going to tear back down, but I assured him I would find something to do with them (and I have!). More on that later! 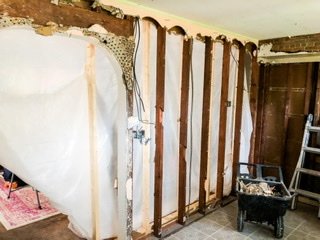 I will say, this wall was drilled into the hardwood floors and the ceiling. These holes have since been patched, but that was another point my cousin was afraid to make. Naturally, I was thrilled to do anything and everything to knock that wall down (and I had recently discovered my obsession with wood filler).

The best part was that we could finally attach a liner to something super sturdy and keep the mess to the kitchen war zone.

Clear out all drywall/plaster, studs, and headers in the way of your new beam!!

Wheeewww!!! Practically there! Most of this step was already done, but there were some scraps in the way up top which needed to be sawz-all’d away before going much further. I love clearing crap out and imagining a fresh, wide-open future.

Also, we had to clear everything out to make sure the structure was going to work out like I hoped. Sadly, it wasn’t going to… and my 12′ hole had to go down to 11 because of floor joist placement.

With all the weight of the roof held up by the beam (which is held up by several 2x4s) we had to make sure those 2x4s were resting safely on solid ground. They were not, and I had to shift my plans over 1 foot… I’m still a little sad about it. It’s fine.

Everyone told me “you’ll need to engineer a beam!” and they made it sound so intimidating. Our engineered beam (directed by the calculators used) was 2 2″x12’x13′ with a piece of 1/4″ plywood sandwiched between… Hardly sophisticated.

Hardware stores will also sell metal beams, which are cool I guess but more expensive?

Either way, I’m so glad I didn’t let that beam engineering talk sway me from the dream hole in my house. But since we cut a foot off our original hole width, I was able to save a 1×1 “sandwich” that I love having as a home reno momento.

I had no part in this, aside from “managing” and helping them see what I saw while they were all underway. In my defense, they wouldn’t accept my help. 🤷‍♀️

It was SNUG, which is a good thing but is hard to watch with a super heavy wood sandwich ready to crush my fam.

Still, she made it in after some gentle massaging and a stern talking-to. 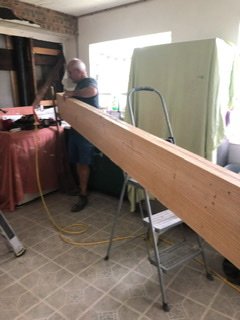 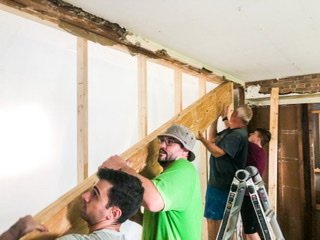 Remove the sacrificial wall (and save the lumber for later 😜) 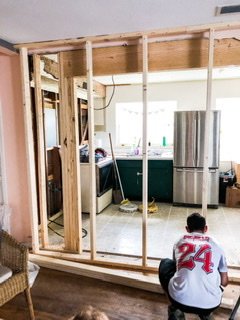 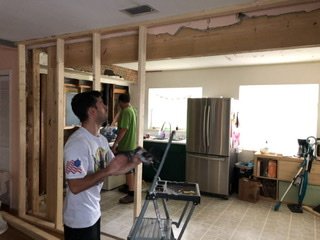 Gone but not forgotten! I piled those studs up in a corner and moved them around my house for MONTHS before finally putting them to work. But honestly, what else was I going to do? Throw them away?! WTF?

My husband calls me a hoarder but I could not let that wood die in vain. I ultimately used it to for my built-in window bench ❤️

Drywall around the beam and studs

The finishing touches. This isn’t really part of the load-bearing wall removal process as much as it’s another step in a renovation. After the beam is fully installed and the temporary wall is removed, the deed is done. 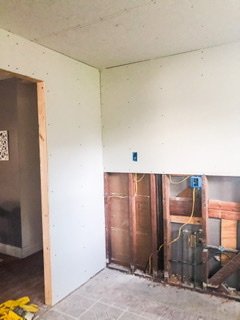 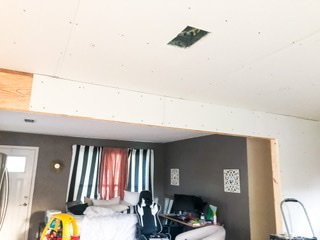 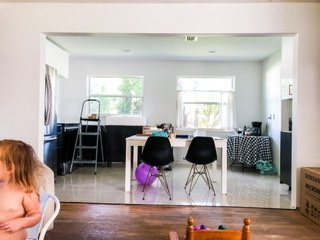 I am so happy we removed that wall. We lost some privacy (I lost wall space for decor and can’t hide a messy kitchen anymore) but the space is bigger, brighter, and gave me the multiple exit routes I needed for my sanity!!

The price was very reasonable, but  it’s worth reminding you that the phrase “It’s very expensive” is entirely subjective.  Altogether, including hourly labor, the sacrificial wall, and the super sophisticated engineered beam, the removal and replacement cost under $600. Which is not expensive at all, in my opinion. Just another notch on the $10k kitchen renovation belt!

More than anything, I’m so happy to have played such an active role in the process. Learning the ins and outs of these projects makes future projects easier to tackle AND evaluate. Since my biggest pet peeve is paying an ignorance charge on anything I buy, by having first hand experience with something traditionally “out of my hands” I can get ahead of bogus charges and have a bigger say in creating my vision.

Go ahead, call me a control freak. It’s probably not too far off.

Either way, increasing my home’s value is just another excuse for me to increase our net worth and when I save money doing it, the ROI is massive. 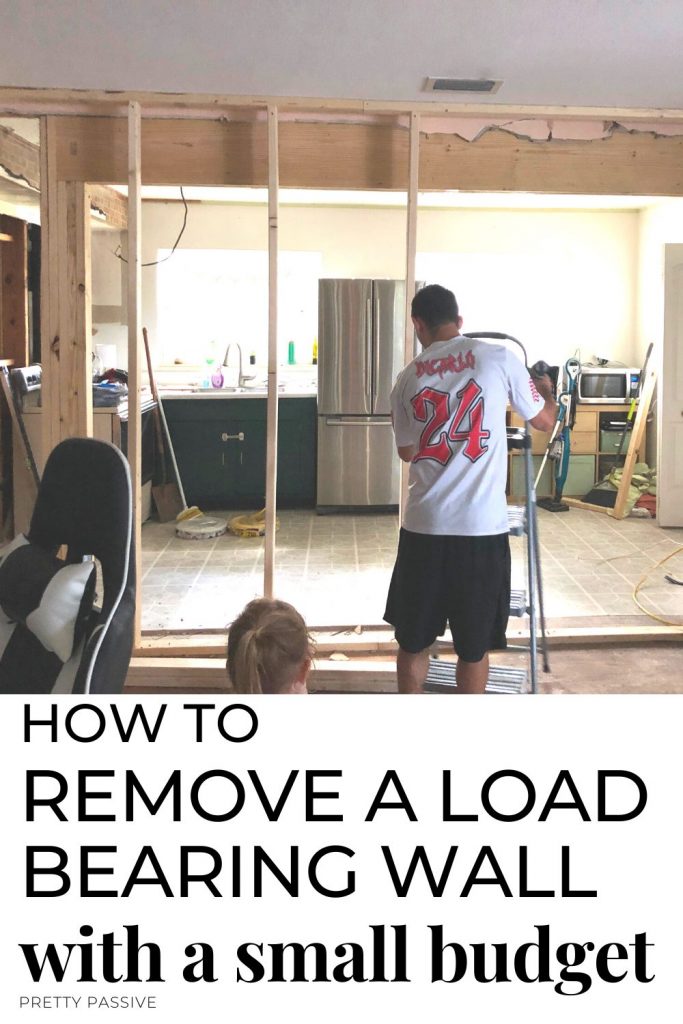 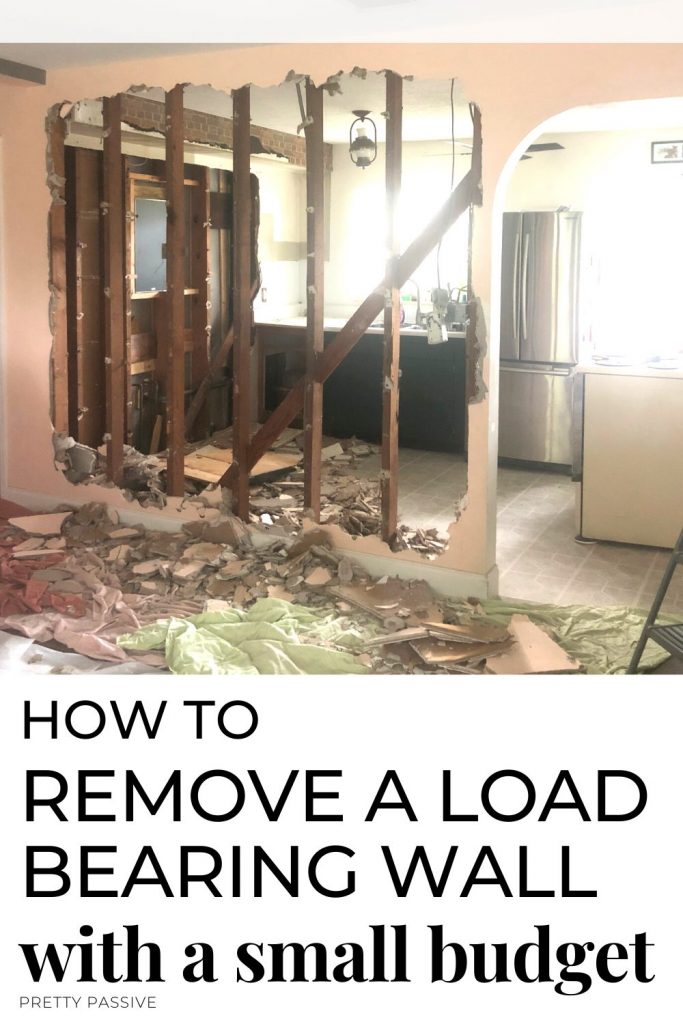