Hellooo!! It’s been a while since my last post, which was absolutely intentional. The timing is not great in blog land, with prime monetizing time upon us, but life happens and when it rains, IT POURS.

If you know me, then you know that I have a bone to pick with the stigmas and social standards placed on millennial mothers. (For real tho, this is my blog lol) People want to say that we can’t have a baby without sacrificing a career, or at least letting it suffer, and that might be true.

but this corporate drop-out has news for you, mama

While the last ~3ish YEARS have been full of doubt, dread, & worrying about whether or not I was a peak-too-sooner and if life was done gracing me with the fruits of all the hard work I’ve invested up to this point, I am here to tell you all that I have made it out ALIVE on the other side with my career, marriage, social life, and sanity in tact after having a baby at 26.

I’m happy to say that I wholeheartedly believe if I can make it out, anyone can (with a little help from the hallmark-esque life lessons I live by).

Because cliches are so…. cliche, I’m going to call them ~*philosophies*~. So let’s get cheesy.

When it rains, it pours.

Out of all the cliche phrases I live by, that one is particularly evergreen. No matter where you are in life, it seems like you get A LOT of whatever it is that’s currently coming your way. Whether it be good, bad, ugly, or beautiful.

Not to keep rubbing it in, but me & mine have been basking in the sunny calm after the storm (another cliche from my repertoire of idioms, yw) for the last 6 weeks or so!

But the proceeding storm, the 3-year one with downpours of bad and ugly was…. rough. There was a decent amount of a nice & pretty sprinkled around, but compared to where we are right now—

And then it got GOOD.

But not right away. It stayed nasty for a long. damn. time. And during that long time, I learned.

I acquired more skills than I have in my entire life. There were downpours of skills being learned in the aftermath of my career suicide.

I was willing to make ANYTHING work as long as it kept me home with my baby, and it actually happened.

It didn’t come easy, as nothing so good ever should (more on that later). It truly tested me and my capacity, and it was hard as hell at times.

While times were tough, my husband and I entertained some extreme solutions to drag us out of the darkness. We BOTH considered joining the military (AGAIN in his case), but I knew the struggle couldn’t last forever. Plus the Air Force wouldn’t take me for… reasons.

In my experience, the bright side tends to show its face as soon as I make a major, irreversible decision. So I was convinced if we just waited it out a little bit longer than we possibly could, we’d be rewarded.

And by the grace of The Greeting Card God, we have been. With downpours of awesome that have completely overshadowed all the crap we just went through.

Having said THAT, I don’t want to instill any fear. If things have been going good for a while, you don’t have to watch for the inevitable doom. Soak up the good and enjoy it while it lasts!

Even though bad things seem to pile up all at once, good things do too. There’s that yin and yang that we need to be aware of, because some things are just out of our control.

You made your bed, now lie in it.

Or better yet, he who stirs the shit pot has to lick the spoon. This is just one of my favorite ways to remind myself to take responsibility for my own actions. But it isn’t infallible. 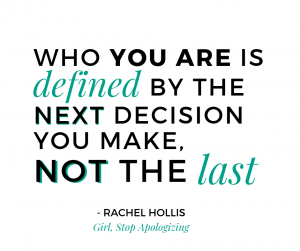 Rachel Hollis (maybe you’ve heard of her?) said something awesome:

I found myself somewhere BAD. I didn’t think it would be that way considering I consciously made the choices that got me there. But at the end of many, many days, I was so unhappy I could scream (and often did).

These weren’t personal decisions. It wasn’t like I was getting drunk too often (although I probably did…). They were professional decisions. I looked at myself and dug into my pit of philosophical life lesson phrases, I thought “you made your bed, now lie in it.”

My job, my daily routine, my career that should’ve provided prosperity gave me a massive headache. The kind you can’t shake. The sickening pit in your stomach that feels like a black hole because you know it’s just wrong.

I was so unhappy that I consulted professionals. One Psychiatrist heard several ear-fulls about how much I hated my job and asked if I’d still hate it if I was working with different people. I knew deep down that I wouldn’t. At least not yet.

Even if you think you HAVE TO be in the job you’re in, if all those “smart” decision took you to hell, it’s time to go.

When you know, you know.

That is the phrase my husband and I used when we eloped within 7 months of meeting with roughly 30 days of literal face time, that is the only explanation I have for ditching my bread winning career for freelance writing & blogging, and that is the only way I can describe how I knew it was time to reproduce.

Not that you want (or need) nitty-gritty details, but I have a few reasons to share:

Everything lined up, except I worked. Ha!

Not the end of the world (or so I thought).

I chose to have a baby, yes, and it wasn’t the best timing for my professional goals, sure. But I traded the headache and heartache of putting off child-bearing for my older, less fruitful self. Because, in case you didn’t know, the best time to have a baby is more about nature than it is about money.

And who am I to distrust mother nature when baby fever started haunting my dreams?!

The baby thing worked in theory & nature, but combining it with modern anything was the fucking worst. Sorry but that had to be said. Hormones can ruin your fucking life.

I LOVED my job. It was perfect for me. But once that baby started cooking, I dreaded going back.

So while I chose to have that baby, I DIDN’T choose to resent my awesome job for taking me away from her. And I didn’t choose to have my role reconfigured with more responsibility when I came back. So what did I do?

I chose to take a less demanding job.

I wasn’t 100% confident in my decision, but all the stars were aligning (and there was a pay boost to boot). It didn’t take long to realize the opportunity cost I negotiated with that shiny new salary. I won’t go into details, but basically this was me on day one:

It was a bad fit. There is a lot more to a job than the title, salary, and benefits. But since I do not have a time machine, I gritted my teeth and stuck it out as long as I could. By 6 months, I decided being labeled a job hopper was better than sticking it out another second.

Nothing worth having comes easy.

You gotta work hard for things that will truly bring you happiness.

These things don’t always fall into your lap. In fact, they almost never do. But I’ve found that the easiest things to get usually aren’t that great or don’t last long.

The best and worst part about working in a soul crushing job is that I don’t regret it. Dragging myself into work everyday instead of driving into oncoming traffic reallllllly put things into perspective. I was willing to SUFFER. Day in. Day out.

That is a very dramatic example, but if you’ve ever hated a job so much then you understand!

While I never had that issue at my previous job, I never would’ve opened my eyes to remote work/freelance writing/blogging and my life would never be as fulfilling as it has become.

I thought I hit the jackpot with a higher salary doing less work, and in a way I did. The kicker was that my mental health deteriorated faster than it was with less money and more work. Basically, there are worse things.

Hating your job is expensive, and it takes more than a shiny salary to make it work for the long run.

I did both, but #2 came after some time feeling out my passions. If you want to skip #1, I suggest you get over that and watch this TED talk:

Good or bad, nothing lasts forever. So let’s soak up the good and cheers to those that are ending soon.

From my break from blogging to my daughter’s toddler-hood, nothing lasts forever. Even this new job of mine is temporary. I can’t imagine being in this exact same role in 10 years, even though I am loving it.

I say this all. the. time. My friend’s and family usually spit it out before I do because they can hear it coming. But I will keep repeating it.

It’s all I can think about when I hear someone complain. Especially when it comes to our babies.

I get you. I do. But I don’t pity you. These are lucky people problems.

These baby related woes will be over before you know it, so I’d like to remind you — everything is temporary.

That might be hard to hear, but I have good news too!

All that crap you’re dealing with? The crappy job, the mom guilt, the student loans, the bad habits… those are temporary too.

And here’s a secret: they end even sooner if you make a plan to get rid of them. Yeah, ALL of those things.

Keep it short and sweet.

When it comes to commitments, efficiency is key.

You wouldn’t know it from this post, but I like to keep things simple. I’ve been preaching this forever, because nothing drives me crazy quite like people rambling on, repeating the same thing over and over and over again. (It’s annoying, right?)

For everyone’s sake, for your baby’s sake, and for your to-do list’s sake, get it off your plate and move on. You have too much to do.

And because I went against my better judgement and KEPT WRITING THIS DAMN POST, I feel the need to emphasize this one.

Going forward, I’d like to keep my blog posts under 1000 words. They say 2k+ is“better for SEO” but ain’t nobody got time for that. I want to crank out quality stuff, and the only thing that’s going to get me back on track is stuff that’s short and sweet. 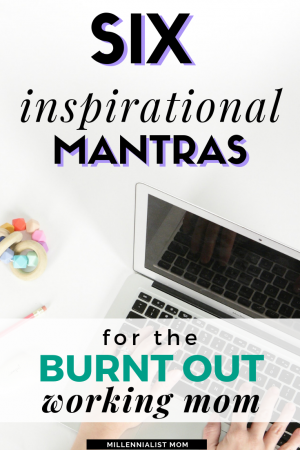