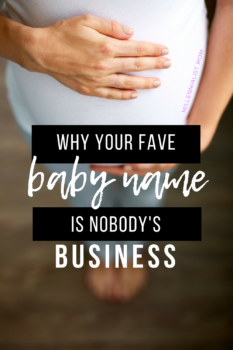 We’ve all heard the stories…. someone’s cousin steals their baby’s name before it’s born. Or worse, your mother-in-law simply can’t cope with the name you’ve chosen for your babe-to-be. These are obvious issues which easily arise. For some reason, people think it’s their business (???).

Sure, I think someone should step in and stop you from naming your child Defcon-5 or something equally ridiculous. But the decision belongs to the parents! Period/Exclamation mark!

One of the first things well-wishers ask after they hear you’re pregnant is, “What are you going to name him or her?!” & I can’t blame them. This is easily the second most exciting part of having a baby join your family. The first being a baby joining your family! Love ’em.

I absolutely LOVE name hunting. It’s so much fun, and I’m sure I speak for every girl when I say I have fantasized about naming my child(ren) since I was, like, 5. Playing house and making mud pies.

Consider this your warning. The baby name question is dangerous territory.

It’s dangerous for both the parents and the questioner…. And I don’t think it should be shared. But that’s just part of me! Some other folks are on board too.

If you’re debating whether or not to share it, I highly recommend NOT.

Especially if you have opinionated* family members….

*opinionated and obnoxiously passionate about those [irrelevant] opinions

There are three scenarios that could play out when you divulge your little person’s potential name. I say potential because many people don’t consider it official until it’s on a birth certificate AND they can put a face to that name. This is probably why it might seem OK to judge/belittle/insult an unborn baby, but I digress… 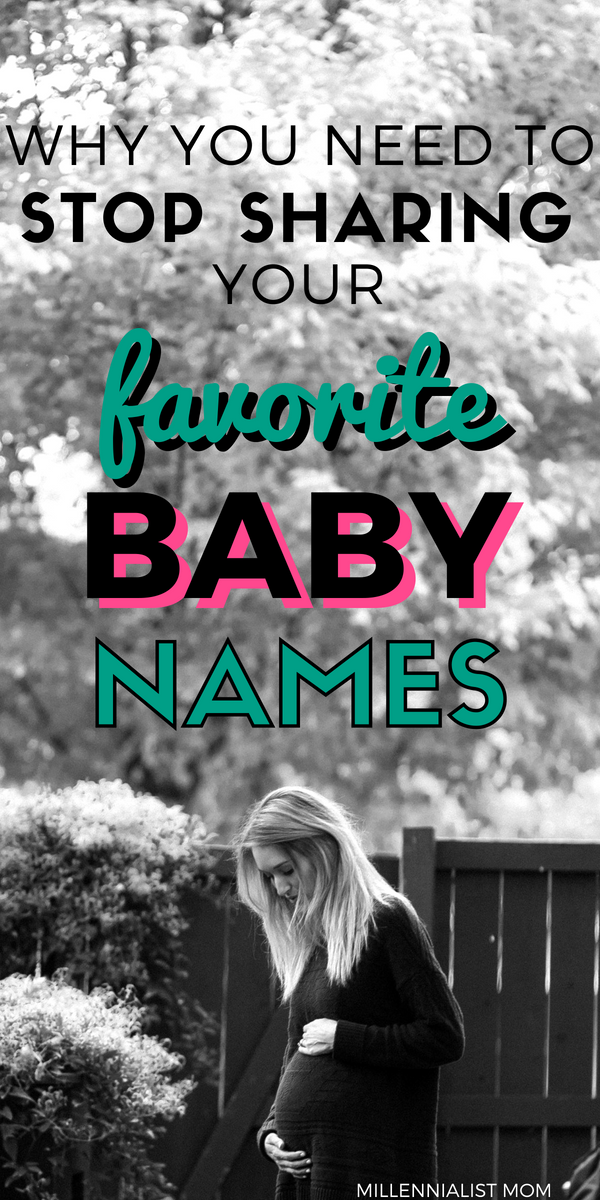 If you’ve chosen a relatively traditional or familiar name, you’ll get a lot of, “I knew someone named that and…..” blah blah horrendous reputation ruining anecdote.

In case you didn’t catch it the first time, that name is tainted to them, and now your baby is too. They have a handful of suggestions which you should consider because your first choice is gar-BAHJ. That poor child.

If you’ve chosen a unique name, you’ll get a lot of, “Why?” Well, because I mistakenly told you what I am going to name my child. Why do you think?

If you like it, it’s yours! Or your baby’s… whatever. Too bad you can’t lick it to keep people away, right?

“Oh. Ok.” These are the people that have opinions but don’t feel the need to share them. Cool, but then why run the risk of them being Scenario #1 and ruining your name of choice?

I say it’s dangerous for the questioner because they may be ruining a name you both loved. Killing that is heartbreaking.

Seriously, it is difficult enough to get the two most important people to agree on a name. How could anyone expect to please everyone?

SPOILER —- it’s not going to happen.

Either way, it’s no one’s business but Mom&Dad’s.

My husband and I chose our girl’s name during a previous pregnancy, and I knew that we’d be lucky if we still loved the name when she finally arrived. I refused to answer that question honestly. I was not going to be a victim of a baby-name ruining!! Not. Gonna. Happen. !.

I imagine these people really just want a chance to throw their suggestions into the ring, because naming a baby is such a fun experience and it’s pretty important!

But that is for the parents. They (You) should enjoy the process without unsolicited opinions.

The Solution – how to keep your baby’s name private

Pick an unbelievably ridiculous name and share it. Here are some of my favorite suggestions:

Get where I’m going with this? (Do I have a dinosaur thing?)

Nothing made me happier than answering strangers with,

The cashier at the grocery store, a co-worker I’ve never seen, a relative or baby shower invitee. It is amazing to see the look of shock immediately switch to disappointment.

It’s a secret, and I’m not budging!

In addition to keeping my baby’s name free of any damaging stereotypes (I don’t care if you knew a girl with that name who ate her boogers…..), her birth was that much more exciting to everyone we love.

They spent months [impatiently] waiting to know what she’d be named, and when they could place her pretty little face to it, opinions went out the window. It was over, she was here and she was named. Well-wishing haters are not going to come in between your beautiful baby and the name you’ve chosen!

I wish you all the strength to keep your baby’s name a secret or to not fall victim to the hate parade!

The form you have selected does not exist.