Yeah… sorry about that.

My husband and I braved the skies (and LA) with our toddler in tow. There are so many discouraging stories in circulation. I dreaded being that girl with the baby that won’t keep it together in a cramped compartment with strangers for several hours.

I am not in a place to give every passenger candy and ear plugs (who the hell has time for that?? Supermom out there just puts me to shame. Day-in, day-out.).

Regardless, I’m here to tell you what we did, what our options were, and what we’d do differently. Hopefully you can learn something helpful along the way!

First, I did what I consider “research” on the topic of traveling with a toddler. Not incredibly extensive, but there were many wine nights on my couch while I anxiously read horror stories about ears popping and angry plane patrons. I particularly loved this article. This is much more extensive and hilarious.

I won’t say it was all for nothing, but I seriously underestimated how easy-going my baby is! Not to give anyone false hope, but the travel-ease might be baby specific. However, I gathered some critical points along the way! Many (if not all) of these are universal. 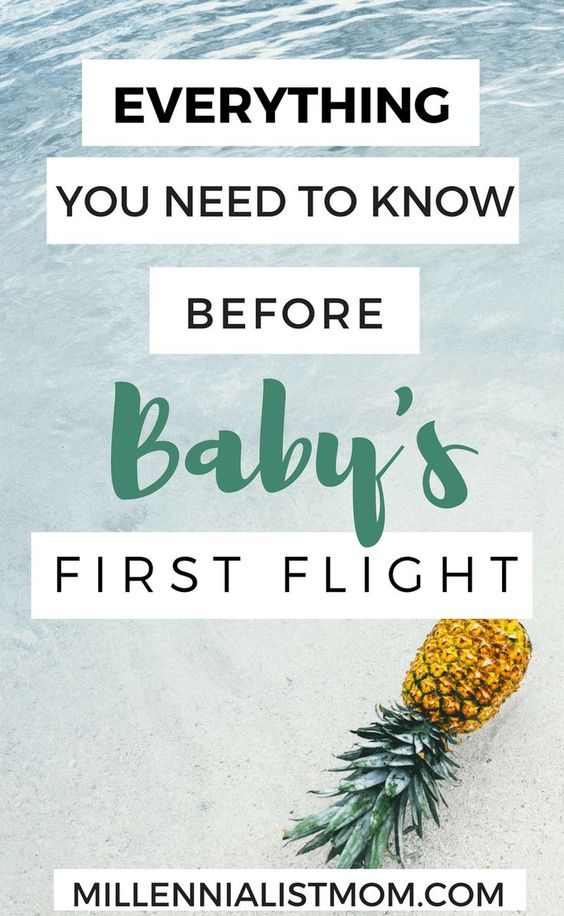 There are 3 Decisions to Make

There are a few things you need to take into consideration before booking the flight.

First of all: If you’re baby is under 2, they can FLY for FREE!!! Why wouldn’t you take advantage of that?

Still, getting baby a seat is an option. Here’s the gist: you have to pay for it. Ick.

If you DO buy a seat for your child(ren), they will need to fly in a car seat.

There are child fares offered by most airlines, but the option we were given actually ended up costing more than our own seats…. So there’s that.

You will need to call and talk to someone to find anything out about child fares. There are many details which are simply glazed over in the online guides provided by airlines. I seriously recommend calling the airline(s) before booking. Just for clarity’s sake.

This decision seemed easy at first, but the anxious dread set in eventually. We went the lap route, and I can’t say I regret it. That was the biggest draw for me.

Other than that, I hadn’t really thought much about it. I did begin to fear that she would be too antsy. Lately she just wants to push us out of our seats, and that did happen. However, it seemed to be the perfect set up for comforting naps. We managed to get a nap out of her on 3 out of the 4 flights we took. See proof:

Even with a busy 14 month old, we felt that it was more than enough. I honestly think it would’ve been more difficult if she had her own space to roam. We had a firmer handle on her in between the two of us! That raised armrest did the trick.

Planes are not all identical, as you know. The seating set-up varies, but you will get to choose where you sit.

I will say the distance to the restroom is not super important.

If there is a blowout, it’s going to suck regardless of how many steps you have to take.

We flew Southwest with their open seating policy (which I totally dig).

Normally this would limit your options, but families with small children get priority boarding! The true priority seating is given to those who bought or earned it, THEN families get to jump on and avoid sitting next to those VIPs.

If you aren’t flying Southwest, I would absolutely call and make your preference known (while you’re mentioning the baby situation).

The decision stands: window or aisle?

Personally, I’m a window gal. My husband loves that aisle seat, because it can get weird asking a stranger to get up every time you have to run to the restroom. I totally get it. It can make holding it to the point of discomfort very appealing. Weird.

But on 3 of our 4 flights, I called the shots and claimed a window!

Full disclosure: I was ready to sedate my baby. That is the advice heard ’round the world. But I ran into a few speed bumps… 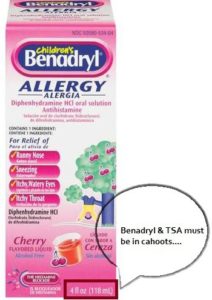 First, I purchased baby Benadryl on my pre-trip Target run. It wasn’t until I got home with it that I realized it was above the liquid limit at 4 ounces….. Ugh ya.

My husband was sent to exchange it for the chewables, which I was just hoping would make it into her bloodstream. Either way, we were ready to go.

In between the first two flights, we knew that it was about to be nap time. We had a little over an hour to burn, and she was LIVELY. There was no nap in sight. We decided it was about that time. It was time to drug the baby into a sweet sleep. Judge away.

The most important thing to know about sedating your baby is the dosage! If you read the packaging, you’ll see it is NOT recommended for anyone under two. That was where our benadryl journey ended… We just couldn’t justify it—and luckily, we didn’t have to!

She passed out better than I’ve ever seen, it was nature at its finest! we got to our seats with a sleeping baby on my chest, and a solid 1.5 hour nap went down.

That was our situation. It was ~*awesome*~

If you’re under the impression that you will need to knock out your little one, you probably don’t have to. Here’s why:

If you’ve ventured elsewhere on here, you would know that I breastfed for the first full year. That was my ultimate goal and I achieved it (yay). Having said that, I was ready to stop. The only thing that made me want to keep going was this upcoming trip! I thought it would be a great way to keep babygirl quiet during a flight. And I wouldn’t have been wrong… if she was younger.

By 1 year+, breastfeeding isn’t the same. They might still be getting  nutrients from you, but it loses its calming effects. She would jump on, rip off, repeat. No more sweet little quiet cuddles. In the earlier days, you could probably get away with a solid hour of breastfeeding, followed by a comfy lap nap. If this is still possible for you, then you are probably definitely good to fly!

We’ve been on the bottle (with whole/goat milk + prune juice) with a little cup action experimented every now and then. It’s perfect too! Just like with my snacks bit, keep their mouth busy and you won’t hear that dreaded plane scream. After your limited milk is gone, water or water with juice will do fine! And the plane can provide those!

I am a planner, and I’m anxious because of that. But I’m a planner, nonetheless. I’d always have a Backup Plan. So if I leave out something that you are wondering about a solution to, please let me know!

These are the ones we ran into:

Making a mess of the plane

I think I saw this coming, but I definitely did not prepare for it (other than saving every napkin I laid eyes on). I really underestimated how damn small those plane seats can be. Opening the tray table did nothing more than give my babe a place to wreak havoc. That being said, beware of those ice-stuffed cups they give you!

Imagine you’re in a restaurant, and baby knocks down that giant cup on iced water [or whatever]. Not a huge disaster. There are servers or bussers prepared to help you out. Flight attendants are not so well equipped to clean your tiny row of seats. Other than those tiny napkins, you better hope you brought a rag.

The only good part was having my husband there to wrangler her while I cleaned the table, seat, and myself (as I praised myself for my bonus shirt in my carry-on). Although, I would have been quick to place her on the floor between my legs. With a toy, of course.

We had a minor fit during one of the flights. When we were sitting in an aisle seat. At her age, all she wants to do is ROAM….. It passed quickly, but only after Daddy held and bounced her. His method is to make her laugh. Through all his time at home with her, that is the best strategy he has. And it WORKS!

Everyone loves the sound of a giggling baby. 🙂 Any cynical passengers will become enamored with a whiny baby once they see the shift from angry to cute and happy.

The best way to go about anything with a baby or toddler is to be open to enjoying it. This doesn’t always want to come easy, but it is worth fighting for!! If you’re having a good time, that energy is contagious. I am proud to say that my toddler travels. And she does it so well, thanks to our attitudes. Let go of some control, and focus on what makes them (and you) happy during stressful times.

That may just translate into everyday things as well. ha! 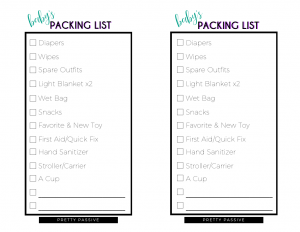