Hey friends! I decided to stick around on here, so I may as well give a glimpse at what brought me out in the first place.

This is the beginning of a several-part series. But this IS a personal blog, afterall. Press back now if you aren’t into hearing all my nitty-gritty. Otherwise, get ready for a daily dose of TMI.

In addition to helping other parents out, I want to shed light on some of my own modern mom probs and how I’ve struggled to find the balance I crave. This should be inspiring if you feel like you’re drowning in the demanding mom-life. We have developed a bad (challenging) habit of making life as hard as possible! Clearly, I’ve found ways to deal, or I would not be here.

Bringing it back to the beginning y’all…

I met my husband (literally the beginning lol) through friends during a night out. It was by no means love at first sight, and it was actually pretty embarrassing. After we made our introductions, it was awkward to realize we should’ve already known each other.

We had spent four years in the same school at the same time with several of the same friends…. I like to think it worked out that way because we wouldn’t have ended up together. He hated girls, I was dating a gay guy. Typical.

For some god-given reason, he managed to get my number that night. Within a week I (jokingly) proposed marriage. Just throwing it out there! See, he was in the military, and he hinted at the “one way we could be together”. Obviously I was just playing off his joke 😉

Sadly, we did not get married that second. But he was set to be reassigned in the next week. Uncle Sam was shipping him off to Germany.

Thus began our long-distance relationship. If you’ve ever considered being in one, you’ve probably told yourself it’s crazy. And you’d be right. It is definitely not awesome. But we made it work, which only made me more confident in him. We literally could “go the distance”! Yes, I’ve been watching too much Hercules, deal with it.

But this was the first thing that made me feel so different from other generations. Being nearly 5000 miles apart was easy with FaceTime and Skype around. We spent “so much” time together, even with the time difference.

I guess it isn’t entirely generational, but it’s much easier to suck it up when you want something bad enough. But it was three months until we could see other outside of our screens.

Crazy ol’, unemployed me bought (read: charged) a round trip ticket to Deutschland! I told myself I was going for Oktoberfest, and I did! Obviously I was deciding whether or not I actually DID want to marry this guy.

Looking back, he must’ve been crazier than I was. Stage 5 clinger over here, and he was into it?

Oh yeah. Turns out, I unknowingly sealed the deal when I bought the ticket six weeks earlier. See, Traditional Tano (I’m definitely going to keep that nickname alive) was waiting for some unworthy chick to expect a free trip to Europe, so his guard was UP.

Poor guy didn’t stand a chance. I am the furthest thing from traditional. And thankfully! If I was, we never would’ve made it this far. 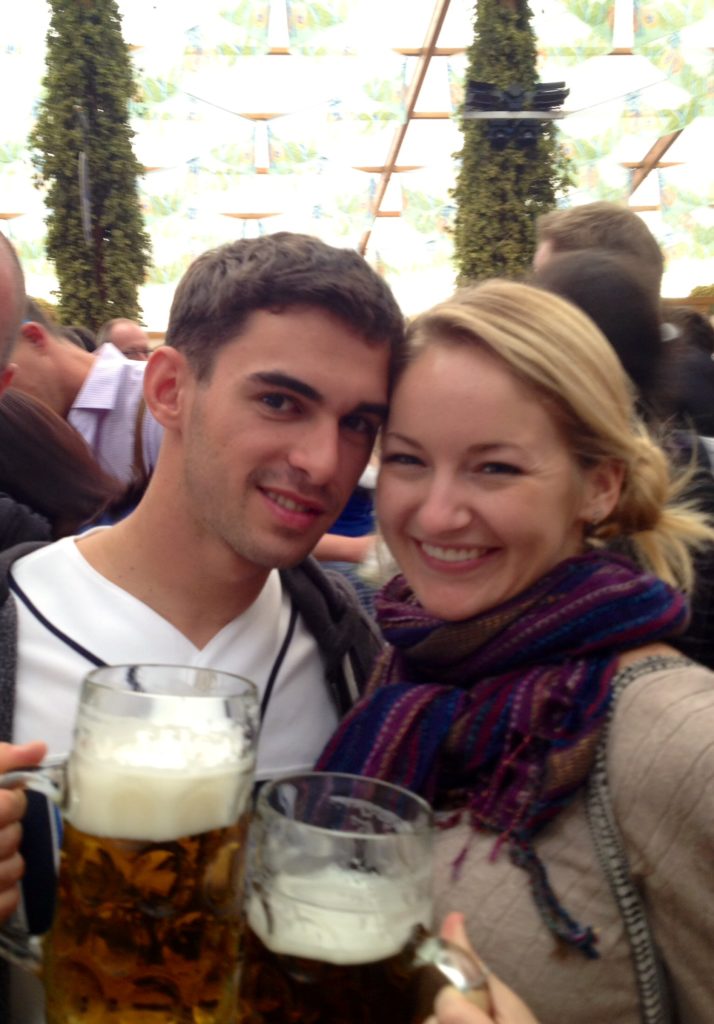 All right, you’ve had enough. Next up is our marriage and how we weren’t there for it. Get excited!!

Anybody else braved a long-distance or military relationship? How has it played out??

« Solo Shower
I’m back from Parent’s Weekend, and everything is OK! »